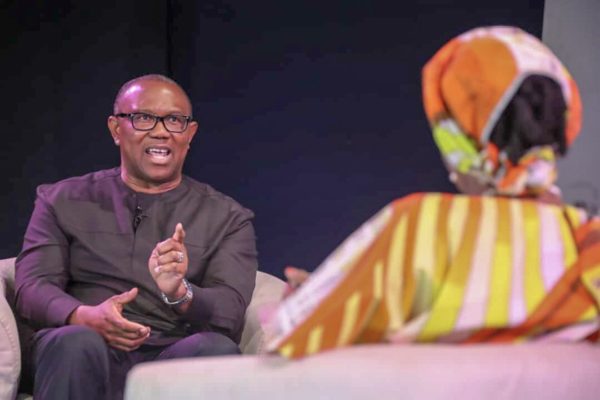 The most significant defence former Anambra State Governor, Peter Obi, put up on why his name featured on the Pandora Papers —another round of private financial dealings expose that confirms how the rich and powerful people worldwide take care of themselves— is that the transitional process that brought him to office was a hurried one. Everything else he said afterward to vindicate himself in the interview he granted AriseTV was almost needless. He had no justification for not declaring his assets wholly while he was the governor. He should have said he was sorry and stopped talking. But he went on and on, even defending himself against a crime for which he was not accused.

According to Obi, he was chairing a bank executive meeting when he was told he had defeated his mandate usurper, Dr. Chris Ngige, in court and had been declared the governor. He said he left everything he was doing at the time to begin his journey towards the governorship. Somewhere amidst the frenzy of the power void in the Anambra State capital and the rushed transitional process, they handed him a paper to declare his assets. He said he listed what he could remember in that moment, and that was it. He declared what he personally owned and he did not deem it necessary to include what he jointly owned with family members. That was the point in the interview that Obi lost me. There is a world of difference between what he opines should be listed as his assets and what the law required of him. He did not do what the law required, and that is the point of the allegation against him.

In a society where certain ethical standards are vigorously upheld, Obi’s omission of certain details in his asset declaration form is how you are judged “corrupt.” I am well aware that Nigerians interpret corruption largely as stealing public funds, but that is also because ours is a morally inverted society, and laws are typically observed in the breach. In Nigeria, down is always up, up is always down, and everyone is always vertiginous. When it comes to adjudging corruption, we have lost all sense of perspective to the point that if there is no mention of millions and billions, Nigerians do not believe certain unethical practices qualify as corruption. Where ethical standards are the norm, hiding assets from public scrutiny is deemed “corruption.” If you have nothing to hide as a public officer, why not be open and transparent? Elsewhere, what Obi treats as a non-issue could have tanked his political career.

As far as Nigeria is concerned, not fully declaring your assets is a minor infraction and perhaps even necessary to protect yourself from extortion or vindictive politicians. Processes of democracy like asset declaration were instituted in contexts where things have measurable value, and citizens are taxed accordingly. In Nigeria where property value can quadruple overnight, people find it easy to overvalue or undervalue their assets either in anticipation of what they would steal while in office or to shield themselves from those who will demand a cut of those assets, Obi’s issue pales into insignificance. His sin is like breaking a plate compared to his fellow politicians who drive a truck right into your living room and rob you of everything, including your humanity.

Yet, while his action seems relatively insignificant, it is no less important to acknowledge. Nigeria became what it is today because we started overlooking the small sins. The things people assumed did not matter kept building up until they became a monstrosity. To institute better social practices such as the one Obi himself spends a lot of time preaching, we must invert the present order that deems certain ethical infractions as sins too small to matter. Besides, for someone who contested as a vice-presidential candidate only two years ago and still has politics in his future, Obi cannot afford to think of himself as above accountability.

Come to think of it, Obi’s involvement in the Pandora Papers global scandal is almost ironic. Here is a politician who has spent his post-governorship life talking down at fellow politicians who run Nigeria aground with their characteristic corruption and wastefulness. Yes, Obi could afford to take that moral highway because he was in office for eight years. Not only did he distinguish himself as governor, he is also one of the rare breeds of politicians that have —so far, at least—not been accused of diverting public funds. If, by now, none of his critics who find his penchant for preaching to fellow politicians and public officials insufferable has not come up with evidence of him diverting funds while in public office, it has to be that none exists. It is also hugely significant that even his political opponents do not call him a thief. They might dismiss him as a blowhard and even frequently criticise his penchant for citing figures all the time —a logicality that stands out in a society like Nigeria where processes are shrouded in deliberate haziness— but nobody calls him a thief.

A man like Obi should not have featured on a list that contains the list of renowned reprobates. It taints him. If he were the politician who had been caught on video stuffing dollars in his Babanriga, his appearance in the Pandora Papers affair would not have been so noteworthy. He is someone from whom everyone expects better, and that is why his response matters a lot. Rather than argue that this issue does not count that much especially since he left office about 15 years ago, he could have displayed some reflexivity by saying, “That was not good enough. I am sorry. I will do better going forward.” Admitting his wrong would have demonstrated that he does not think of himself as above the ethics and values he preaches. What the Pandora Papers has tested is the degree of his commitment to the things he publicly proclaims. His self-justification on a matter on which he is clearly wrong is problematic.

Some of Obi’s defenders have railed against the Panama Papers revelation as ultimately pointless. Truly, we have seen this movie several times before and nothing really gives, especially in countries like Nigeria where institutions are relatively weak. From the HSBC Geneva records breach of 2009 to that of HSBC Jersey of 2012, Offshore Leaks of 2013, Panama Papers of 2016, Paradise Papers of 2017, to the present Pandora Papers, famous people regularly get incriminated for blatant corruption. The scale of the revelation of the Pandora Papers, an investigation involving more than 600 journalists and 150 media agencies based in 117 countries, is especially unprecedented. The trove of documents unearthed showed how rich people in every country, from Kenya to Jordan, Russia, Czech, Bahrain, Saudi Arabia, China, the USA, all benefit themselves at collective expense.

For us in Nigeria, we now know for a fact which politicians and pastors lay up their earthly treasures in tax havens. We can at least point out those with a Plan B, people squirrelling away funds while waiting for the day they would bail out on their country. As astounding —and even amusing— as these revelations are, they also fill one with the despondency that nothing is ever really going to happen to these plunderers of commonwealth. Those that should push for reforms are just as guilty, and cannot summon the moral capacity to institute change processes. Yes, these exposés go a long way to substantiate our suspicions about the extent the rich and the powerful will go to guarantee their future at collective expense but they also underscore our helplessness. What power mechanism is available for forcing the culprits the Panama Papers have revealed to account for their sins? Despite the lack of political will towards ensuring accountability, exposés like the Pandora Papers’ still go a long way to help us weigh the soul of our leaders, and hopefully discern between someone who has merely been grandstanding all this while and those who have the integrity to atone for small sins.

Abimbola Adelakun is a Nigerian writer and can be reached through email: [email protected]