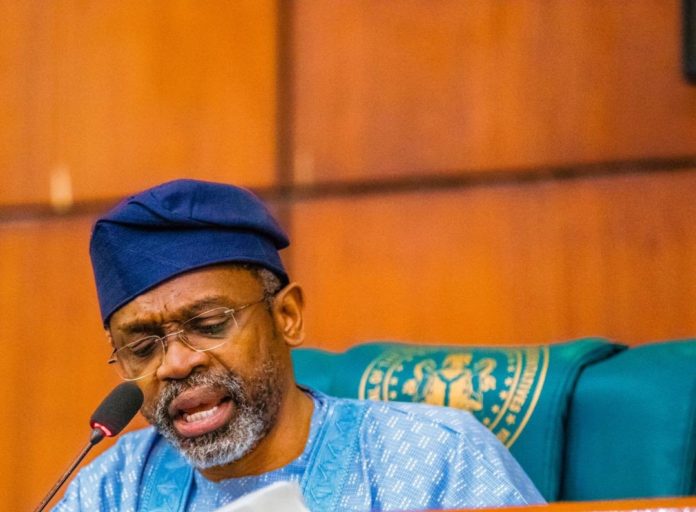 Femi Gbajabiamila, the speaker of the house of representatives yesterday opposed a prayer inviting President Muhammadu Buhari to appear before the lower legislative chamber.

Mr Buhari was summoned over the worsening insecurity bedeviling the nation. In his reaction to the recent massacre of rice farmers in Borno State, he said security agencies were given all they needed to secure the country but that has not yielded positive results.

The incident which occurred last week renewed calls for him to sack serving service chiefs and replace them with new ones who will bring in fresh ideas but as usual it fell on deaf ears. This is despite the Nigerian Senate lending its voice to the call thrice.

Garba Shehu, presidential spokesman, while speaking on the renewed calls said his principal will oust the service chiefs at his pleasure, when he feels they are no longer useful, despite most of them outliving their tenures.

During plenary yesterday, lawmakers from Borno State at the green chamber sponsored a motion which included advising the president to declare a state of emergency on insecurity and inviting him to appear before the house to address lawmakers on what his administration is doing to remedy the situation.

But the interference of the speaker made Mr Santomi who led the caucus to exclude part of their prayers inviting the president. The exclusion angered Mr Jaha who insisted the prayer must be included and cannot be removed until other members unanimously agreed.

“Mr Speaker, I stand here on behalf of the displaced people of Borno state who elected us. For your information, I was elected by those people, including those in the internally displaced persons (IDP) camps to protect their interest,” Mr Jana, coming under matters of privilege, said.

“All the lawmakers from Borno resolved that prayers of the motion should remain the way it is. My name is there as a co-sponsor of the motion. I realised that by the time he was reading the motion, he eliminated some prayers that we have all agreed that is going to be passed here.

“I give up my life for my people. So, I fear nobody except God. The other prayer that he didn’t put is that we are going to invite Mr President to come and explain to the House on the security situation. These security forces have been given all the support to do the job. If we invite them, they will say they don’t have enough equipment.

“Yesterday (Monday), the President said he has given them all the support to do the job. Unfortunately, they fail to do it. Secondly, I said on the floor of this House that we are not taking the battle to their doorsteps,” the lawmaker added.

Still kicking against the prayer, Mr Gbajabiamila said inviting the president to appear before them to publicly discuss security issues was not ideal.

“This is an appeal from the chair. We are talking about security matters. You and I know that the channel of discussion of security matters such as this will not be to invite the President to come and disclose issues of security and what they are doing. It will be counterproductive,” the speaker said.

“The prayer is all-encompassing. By asking the President to declare a state of emergency, which is part of the prayers, it allows for extraordinary measures.

“That singular prayer is more important than the President coming to tell us anything. So, it is an appeal so that we don’t react based on the passion we feel. Honourable Jaha, I am appealing to you because of what is involved,” he pleaded.

Tempers flared when the House Leader, Alhassan Doguwa (APC, Kano) and Shehu Koko (APC, Kebbi) supported the speaker suggesting the leadership of the House should interface with the President on the issue but their plea did not change the resolve of the Borno lawmakers.

Thereafter, the house went into executive session and on resumption, Mr Jaha moved for the amendment of the motion and included the prayer earlier removed.

“Mr Speaker, I want to move an amendment that the President does come to the House to explain to explain the security situation in the country,” he said.

The motion was finally adopted by members present, although some lawmakers left the floor of the house during the executive session.