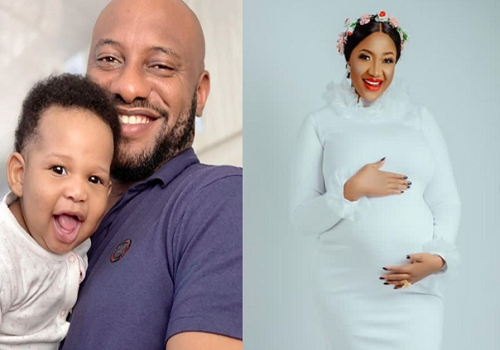 In April, the 40-year-old actor threw his fans, colleagues and social media into a frenzy after sharing pictures of his baby boy and new wife on his Instagram page.

The actor said it was high time the world met his son, Star Dike Munachimso Yul Edochie, whom he loves much as his other children.

However, the actor posted a nine-minute video on his Facebook page on Friday titled, ‘Why I married a second wife.’

He said: “It’s been an amazing period of my life; ever since the news that I married a second wife, it has been crazy.”

The actor said he has been receiving calls and messages from fans worldwide since the controversy in his marriage broke out.

Yul, who started his acting career 17 years ago, said his fans, family and colleagues deserve to know why he married a second wife.

In the video, the father-of-four said he married a second wife because he could not let go of his colleague-turned-wife.

According to him, a man can love two women.

He said: “At this stage in my life, I think it is possible for a man to love two women because two women can contribute differently to the man’s life.

“Someone cannot come into your life and make so much impact, and you just cannot let this person go. Of course, many people would say, as a married man, why did you allow a woman to come into your life. I said I was wrong and took the blame for that.

“These things happen. Let’s be honest. I realised that I could not let an incredible woman leave my life.

“These are very wonderful women in town. They bring different things to the table. You can really love two women at the same time. I thought it was not possible, but now I realise that it is possible.”

The couple celebrated their 17th wedding anniversary in October 2021.

Judy and Yul started working together when she produced and played the lead role in the ‘Native Girl’ cinema movie.

It was the first time she would direct or make a film. In the movie, she played the timid wife of Yul, an international businessman.

Aside from acting and directing, she also said Yul supported the project financially. She said it cost N4 million to produce the film.

Judy was in the habit of celebrating Yul on her page, but people assumed it was all about a junior colleague doing the needful for a superior.

Amidst the drama currently ravaging Yul’s marriage, his equally famous father Pete Edochie, through a statement written by his elder brother, has disassociated from Yul’s second wife.

Yul, who graduated from the University of Port Harcourt, where he received a Bachelor of Arts in Dramatic Arts, followed in the footsteps of his father, a veteran Nigerian actor.

His brother, Uche, an accomplished Nigerian Postwar and Contemporary painter revealed that Yul informed them of his decision to marry a new wife, and they strongly advised him not to.

He also said the family is as shocked as Nigerians on social media.

Yul and May have four children- Three boys and a daughter. Their names are Danielle, Kambi, Karl, and Victory.