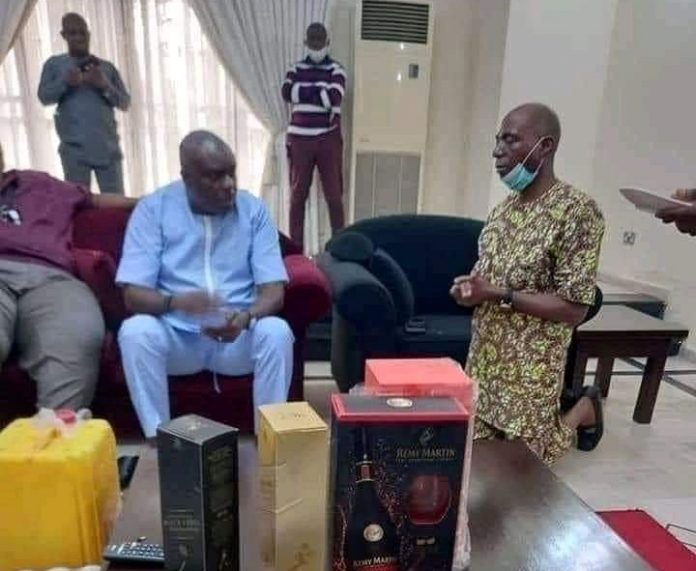 Reactions trailed the picture showing the serving lawmaker who wore an ankara outfit with his face mask kneeling on the tiled floor before the former governor convicted for embezzling funds of the oil-rich state while he held sway from 1999 to 2007.

The ex-convict who has remained influential in the state despite his criminal record wore a light blue outfit and sats on a coach which is red in color with another in black beside it.

A yellow gallon could be seen beside a center table, in front of Ibori, which had some liquor on it while two aides at his back and an unknown man who sat beside him watched.

Confirming the authenticity of the picture taken recently to Punch Newspapers, an associate of the lawmaker who is serving his fifth term said the senator knelt before the former governor as a sign of respect.

“Senator went to visit him on Wednesday,” the anonymous source confirmed. “Ibori is a senior, a king and an elder to him, being his former boss. Whenever you go to pay homage to an Urhobo elder or someone you hold in high esteem, you kneel down.

“It is a sign of appreciation for people to show who the person is to you. Things are just being twisted on social media. It is a personal relationship. You don’t expect the senator to stand up to address Ibori.

“Senator came to pay homage to him because he had not seen Ibori in a long time and he took drinks. Those are the drinks you see on the table in the picture,” the associate added.