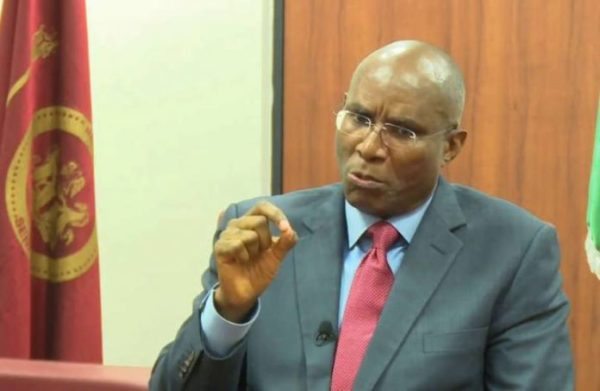 Ovie Omo-Agege, deputy senate president, has revealed why the lawmaking arm of government cannot enact a new constitution for the country.

There have been calls for the discard of the 1999 constitution being used for a new constitution which will reflect the wish of Nigerians.

It gained momentum when members of Alliance of Nigerian Patriots, led by Ambassador Umunna Orjiako, paid the Delta Central lawmaker a visit yesterday in Abuja.

Mr Omo-Agege who chairs the Senate Adhoc Committee on Constitution Review told his guests that the National Assembly, particularly the Nigerian Senate, lacks the power to enact a fresh constitution for the country.

The top lawmaker said what the upper legislative chamber could only do was to amend the existing constitution.

“One of the issues you raised is the replacement of the 1999 Constitution. I am not so sure that we as a parliament have the power to replace the constitution,” Omo-Agege said.

“We can only make amendments. And it is explicit in Sections 8 and 9 of the Constitution on how we can do that and the requisite number of votes required.

“I say that because there are some top attorneys in this country, who for some reason, keep saying that we don’t even need any of this, that we should just bring a new Constitution. We can’t do that. What we are mandated to do by law is to look at those provisions and bring them up-to-date with global best practices, especially to the extent that it tallies with the views of the majority of Nigerians. So we are not in a position to replace this Constitution but we can only amend,” he said.

He also said those calling on the president to scrap the upper legislative chamber were ignorant because the president has no such powers.

“One of the issues raised by #EndSARS Protesters was that they should abolish the Senate and merge us with the House of Representatives. We are not in a position to do that. Mr. President is not even in a position to do that as well. Because they believe that he can just by fiat say ‘Senate bye bye. it will now be a National Assembly made up of only the House of Representatives’.

“But, as I said at a different forum, the President does not have such powers and I am not so sure that even we can legislate out the National Assembly,” he said.