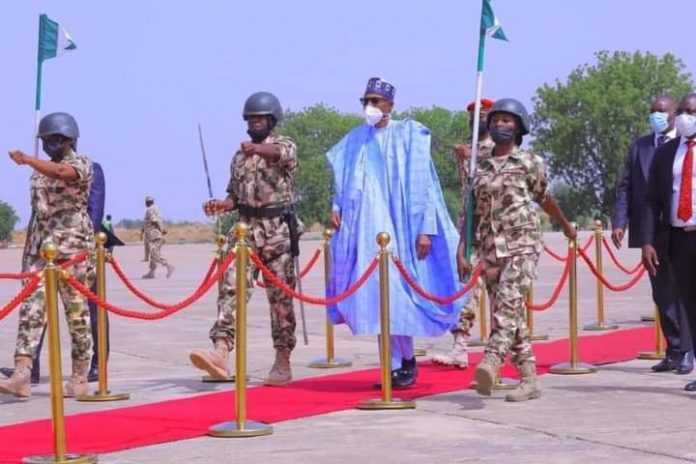 President Muhammadu Buhari says there will be no rest for his administration if peace is not fully restored in Borno State, one of the hotbeds of Boko Haram terrorists.

Mr Buhari who stated this on Thursday while on a one-day official visit to the North-East state vowed to ensure that those displaced by the terrorist group heinous acts return and rebuild their lives.

The Nigerian leader said he visited to review the security situation in the state, one of the reasons residents booed him when he visited them early last year.

“I am here today first and foremost to appraise the security situation in Borno state and the north-east region in order to move full speed ahead and conclude the work of restoring permanent peace to the region,” the president said. “We will not rest until all the millions of internally displaced persons are able to return and resettle in their homes and rebuild their shattered lives.

“It was part of these measures that I gave approval for the federal government to build 10,000 resettlement homes in Borno state; 4,000 of these homes have already been completed. Furthermore, I approved for constant release of food intervention by the Nigeria Customs Service and the North East Development Commission in order to support displaced persons.

“I wish to reassure your highness, the Shehu, all the royal highnesses, elders, the government and people of Borno state and the north-east region, of federal government’s relentless determination in the search for peace in Borno, the north-east and the rest of Nigeria. We will never rest until peace is fully restored and all displaced persons are resettled in their home communities.

“I will never forget in my life that during my career as a politician, Borno state is where I got the highest percentage of votes — more than 90 percent! The least I can do for you is to continue the relentless effort to fully restore peace to this state, the north-east region and the country as a whole.

“Furthermore, in the light of the current improvement of security in the state, I have also issued directives for the immediate resumption of oil and gas exploration activities in the Lake Chad Basin. This is part of our overall effort to restore the state back to normalcy,” he added.