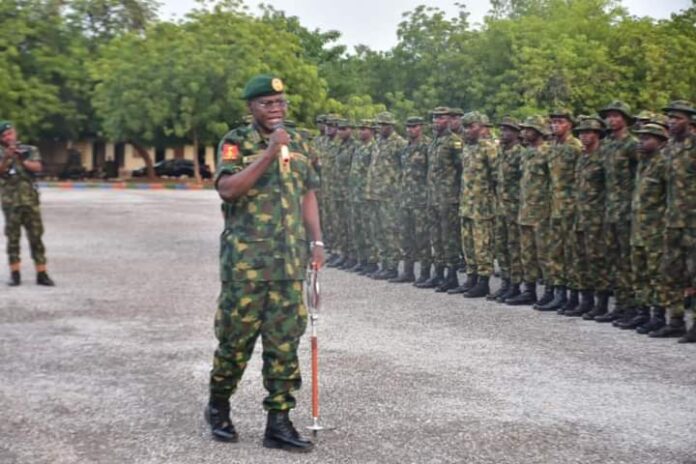 NIGERIAN ARMY IS WIDELY ACCLAIMED AND GLOBALLY RESPECTED: A REJOINDER TO THE WILD CLAIMS BY THE ECONOMIST MAGAZINE REPORT ENTITILED: ‘INSURGENCY, SECCESSIONISM AND BANDITRY THREATEN NIGERIA’

The Nigerian Army has been notified of a recent article published in the online version of the “Economist”, a London based magazine, titled “Insurgency, Secessionism and Banditry Threaten Nigeria” which was ostensibly crafted to denigrate, demonize and destabilize the Nigerian Government. The report also contained some unimaginable slurs targeted at the Nigerian military and the Nigerian Army in particular, to which we would like to respond.

Even as the real intention of the otherwise respected Economist magazine in publishing such toxic concoctions weaved up as report on Nigerian Government’s response to the multi-faceted security challenges assailing the country is yet to be unraveled, the source of the article is very clear. It is one of those deliberate falsehood and noxious narratives orchestrated by a network of detractors and coven of dark forces working very hard to adorn the Nigerian Army in an unfitting garb of infamy. The vile report which the Economist chose to offer its platform for publication, spared no effort in trying to vilify and rubbish the image, character and reputational standing of the Nigerian Army, but failed woefully.

As a professional, hard-fighting and globally respected institution that has continued to occupy deserved glorious position in the comity of global defence forces, the Nigerian Army is certainly not what the so-called report by the Economist tried to characterize it. Even more ludicrous was the embellishments of the said report by the notorious unprofessional media outlets that were quick to republish the obvious falsehood.

How is it conceivable that an international magazine worth its name and professional reputation would agree to lend its medium for a hatchet job of an article without as much as committing little effort to finding out the real truth about the Nigerian Army? How is it imaginable that the Nigerian Army that has distinguished itself as a worthy contributor to global peace and security through regional, continental and international peace keeping and peace support operations would be characterized as “Mighty on paper”? How can the Nigerian Army that has restored democracies, brought peace to troubled lands and stabilized the sub-region through the dint of hard work, commitment to duty, discipline and professionalism be so denigrated?

Is it the ‘ghost soldiers’ of the Nigerian Army that have weathered the storm of terrorism and insurgency of Boko Haram and Islamic State of West African Province Terrorists (ISWAP) in the north eastern part of the country and parts of the Lake Chad region?

In case the Economist magazine and those who fed it all the lies it published do not know, the Nigerian Army working in a joint environment, has been able to stop ISWAP, a very formidable international terrorist organization in its tracks, in spite of all the obstacles, including arm sale blackouts on its way. The Economist and its ilk ought to have known that the Nigerian Army has long distinguished itself as a professional force that does not toy with accountability nor shirk from its statutory responsibility of defending Nigeria from external aggression or internal insurrection.

Is it not curious that an otherwise respected international magazine could so easily be sucked in by the antics of conflict merchants and agents provocateurs who are uncomfortable with the steadfastness, patriotism, unwavering commitment, sacrifice, ruggedness and resoluteness of the Nigerian Army in stamping out terrorism, banditry and other violent crimes assailing the country and the West African sub-region? How the Economist magazine failed to do simple due diligence on the said fabricated report is worth interrogating by those who are interested in distinguishing between rogue journalism and professional one.

Let it be known to the Economist magazine and those who concocted the lies they published that the gallant officers and soldiers of the Nigerian Army are undeterred, undistracted and totally unfazed by the harebrained assertions contained in that silly report.