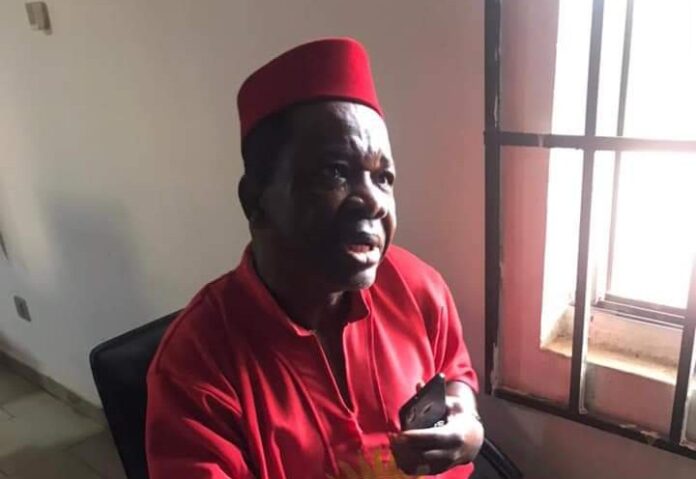 Celebrated actor, Chiwetalu Agu, who was assaulted by soldiers for putting on attires identical to those of Biafra agitators has been seen cautioning and instilling discipline in a soldier not to misbehave while his superior is talking.

The quinquagenarian was arrested after being manhandled at the Upper Iweka area of Onitsha, Anambra State on Thursday and regained freedom Friday morning.

Army spokesman, Onyema Nwachukwu, had accused him of inciting members of the public to join IPOB, an accused he denied while explaining what transpired.

Like was previously gathered by TODAY POLITICS from locals after the incident, the actor said he was on a charity mission when the soldiers approached him and brutalised him over his attire.

Before he was freed, a video clip of the actor being questioned was circulating on social media. Explaining why he wore the outfit, Agu said it was a civil dress and not those of the Indigenous People Of Biafra (IPOB) and its paramilitary arm, Eastern Security Network (ESN).

“No, no, no, I can wear this,” the popular actor who sat on the floor said when a soldier was asked to get another dress for him. Explaining his dress before being asked to stand up, he said, “this is rising sun, not Biafra, not Eastern Security Network, do you understand?.”

“With my education, I know areas to go, areas not to go,” he added before a soldier by side showed him the direction of the photo gallery of the 82 Division of the Nigerian Army where he should head to.

While the military personnel was still giving him direction on where to go, Agu cautioned him thrice not to talk while his superior is doing same, saying, “your Oga (beside him) is talking.”

When he finally got to the verandah of the building, the thespian explained further, “I was sharing 10,000 worth of bread when he (soldier) came, no campaign, nobody was doing any demonstration or carrying people along. Even people who were hawking, I was giving them bread.”

Nigerians have widely condemned the conduct of the soldiers with Human Rights lawyer, Inibehe Effiong, beckoning on military authorities to apologize and compensate the brutalised victim.