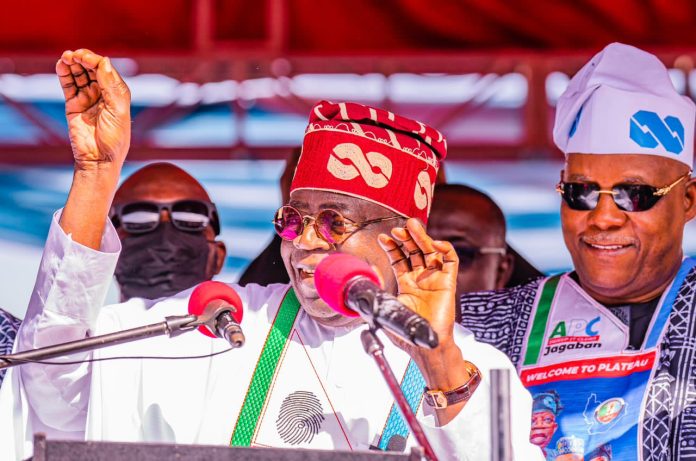 Over the last few days, several video clips of Bola Tinubu’s disturbingly cringeworthy verbal mishaps during speaking engagements have flooded social media platforms and have caused me to wonder if we’re witnessing the real-time mental decline of Nigeria’s leading presidential candidate who could be president next year.

Because Tinubu has also been the victim of a well-coordinated blizzard of carefully designed falsehoods in the last few days, I wasn’t sure if the videos I saw were digitally manipulated to undermine him. So, I decided to look up the longer versions of the videos on YouTube on Friday before writing this column.

The clip that particularly provoked intense feelings of anxiety in me was one in which Tinubu momentarily departed from his prepared speech in Owerri, Imo State, on Thursday and spoke in a language that was neither English nor Yoruba, the only two languages he speaks.

I didn’t believe the clip was real, so I checked TVC News’ live feed of the event, which has been curated on YouTube. TVC News, as is well known, is Tinubu’s TV station, which has zero motivation to put him in an unflattering light.

At the 03:29 – 03:49 mark of TVC News’ curated YouTube video of Tinubu’s Owerri speech, he said, in praise of Plateau State Governor Lalong’s leadership of the APC presidential campaign council, “You see the innovation. If we lend ourselves to innovation, we can create wonders. Here is a successful, again, a townhall different from balabloo bloo blu bulaba.”

What was that? Balabloo bloo blu bulaba? I understand enough Yoruba to know that that isn’t Yoruba. I asked Igbo people if this was an approximation of something in the Igbo language since Tinubu was speaking in Imo. They said it was gobbledygook. Or was he speaking Goemai, the dominant language in Shendam where Governor Lalong is from? No chance. And he was certainly not speaking English.

This wasn’t one of Tinubu’s familiar dizzyingly incomprehensible verbal whirlwinds. It was pure, unmistakable gibberish. So, what happened? Was he in a momentary trance? Was this babytalk instigated by a stuporous, narcotized state? Or was it the public indication of a cognitive decline?

This is important because, whatever you may think about him, Tinubu is intelligent and used to be articulate up until 2019 or thereabouts. His speech impediments and cognitive decline started—or became noticeable— in early 2021. I first called attention to this in my April 10, 2021, column titled “Tinubu: A Presidential Disaster Waiting to Happen?”

I wrote: “Anyone who has watched Bola Ahmed Tinubu closely and dispassionately can’t help but notice that the man is not well. He is a walking psychedelic calamity. His endless verbal miscues and nonverbal cues constantly conspire to construct the profile of a man who is battling a troubling internal turmoil, who is held hostage by disablingly malefic inner demons.

“He appears to revel in his own self-created alternate universe that is always lightyears away from ours. When he speaks and walks, he strikes the observer as a man in a daze, in a cripplingly drunken or narcotic stupor. He slurs his words, slacks his attention, blanks out, has awkward gaits (which caused him to trip at Arewa House in Kaduna recently), and seems impervious to the world around him. That, for me, is the outward manifestation of an inner turbulence.”

But spouting literal mumbo jumbo in the middle of a campaign speech is a whole nother level. This is a low-water mark of mental deterioration. Now, I am both worried for Nigeria and sorry for Tinubu. I don’t know what ails him— or if he’s merely the victim of the ravages of dotage—but the presidency would exert more stress on him and worsen his condition. Nigeria would be the worse for it.

Neither Umaru Musa Yar’adua nor Muhammadu Buhari was this evidently ill before ascendance to the presidency. Yar’adua died in office and Buhari is a caricature of his former self who started to shirk the responsibilities of governance to tend to his health from his second year in office. A sick country like Nigeria does not deserve that kind of double whammy of tragedies.

ASUU’s Misplaced Aggression Against Students
I understand that several members of the Academic Staff Union of Universities (ASUU) are hurting now because they haven’t been paid salaries for eight months and were only paid “half salaries” in October. I don’t want to add to their hurt.

In fact, on October 20, I wrote “A Plea for the FG to Pay Lecturers” where I wrote, among other things, the following:

“I know many parents who say ASUU should be left to bear the consequences of its choices and that since students can never recover the time they lost when the union was on strike, lecturers shouldn’t be paid for the time they didn’t perform their primary duty: teach.

“I understand the anger that motivates this sentiment but given what I know of the condition of several lecturers now, I’d like to plead with the federal government to, in the spirit of compassion, pay the lecturers, if not all of their eight months’ pay, at least some of it.”

But newspapers reported yesterday that the Olabisi Onabanjo University branch of ASUU threatened that if the federal government should pay lecturers “withheld salaries or risk scuttled academic session.”

In several interventions, I’ve called this stance of ASUU an example of cowardly cruelty to helpless students. Canceling academic sessions, refusing to teach students, or frustrating the graduation of students who have already completed their studies because of anger toward the federal government for refusing to pay lecturers for the months they were on strike betrays both scandalous immorality and a disturbing deficiency of imagination.

In other words, ASUU will just inflict purposeless punishment on an already subaltern, tormented, and vulnerable population without getting at the federal government that is the source of their resentment and rage. How does that make any sense?

ASUU insists that it deserves to be paid for work it hasn’t done while on strike—and in contravention of global practices and Nigeria’s no-work-no-pay law. Fine. The best way to make its case is to go to court. It has among its ranks professors of law and Senior Advocates of Nigeria (SAN).

Saturday Tribune editor Lasisi Olagunju wrote a brilliant column on October 10 titled “Nigerian Judges and ASUU” where he argued that ASUU can take advantage of a judicial precedent laid by a ruling in a case filed by a third party that argued for the upward review of the remuneration and conditions of service of judges. He drew a parallel between Nigerian judges and university lecturers and contended that should ASUU or a third party sue the federal government, victory would be a slam dunk.

Of course, that involves hard work, thinking, and careful execution. It’s harder than knee-jerk strikes and maiming the dreams of hapless and defenseless students. As I pointed out sometime ago, ASUU’s attitude toward students to whom they should be guardians and protectors caused me to temper my sympathies toward them.

“My sympathies are always and will always be with the oppressed and the underdog. Punishing students with undeserved ‘spillovers’ and arbitrary cancellation of admission is cruel, unusual, tyrannical, cowardly, and unjustifiable. I’ll oppose it with every resource I have,” I wrote.

If ASUU is able persuade the courts to force the the federal government to make exceptions for it—like it always did in the past—and exempt it from Section 43 of the Trade Disputes Act, which says, “where any worker takes part in a strike, he shall not be entitled to any wages or other remuneration for the period of the strike,” I’d be happy for them. But they shouldn’t transfer their aggression to innocent students should they fail. Their enemy is the government, not students.