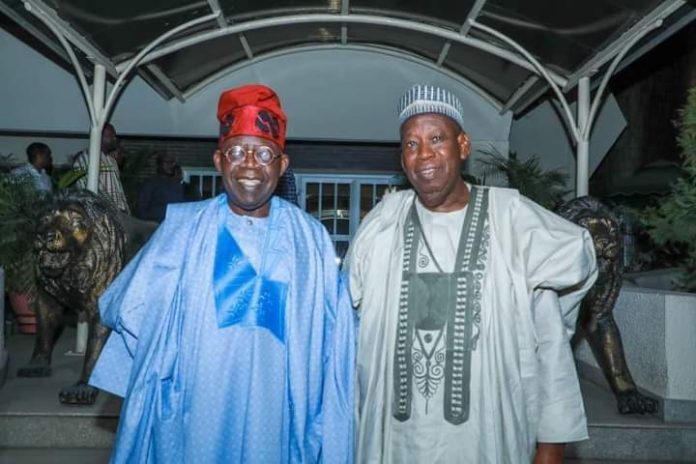 Governor Umar Ganduje of Kano State says the presidential candidate of the All Progressive Congress (APC), Bola Tinubu, has agreed to pick a running mate from the same religion he practices.

Mr Ganduje, an ally of the former Lagos governor, stated this on Friday while addressing hundreds of Islamic cleric at the Kano State Government House as part of activities to mark Eid El Kabir.

“We have advised him (Tinubu) to pick a Muslim deputy and he has agreed,” the Kano helmsman said.

Mr Tinubu from the Southern part of the nation is being pressured to pick a running mate from the country’s Northern region dominated by Muslims as himself.

An unwritten agreement to jointly run with President Muhammadu Buhari during the 2015 general election met brick wall after the Nigerian leader ditched him for Vice President Yemi Osinbajo, a Christian preacher, whose history of nomination for the position has different narratives.

The hurdle is now before him to choose his running mate after winning the ticket of the ruling party. Reports on a section of the media say he is being pressured to run with a Muslim from the North despite being one because the version of the religion he subscribes to is inferior to that of his Northern fellowers.

Those supporting the repetition of  the Muslim-Muslim ticket of 1993 whose outcome was annulled, are of the opinion that competence be used as the yardstick in arriving at the nomination rather than religion.

Their opposers, arguing that 1993 varies from 2023, are also of the opinion that if competence should be preferred then the running mate must not come from the Northern region.

Besides, the Christian Association of Nigeria (CAN) has warned that it will be politically suicidal to present a joint ticket from same religion given the present state of religious tension in the country.