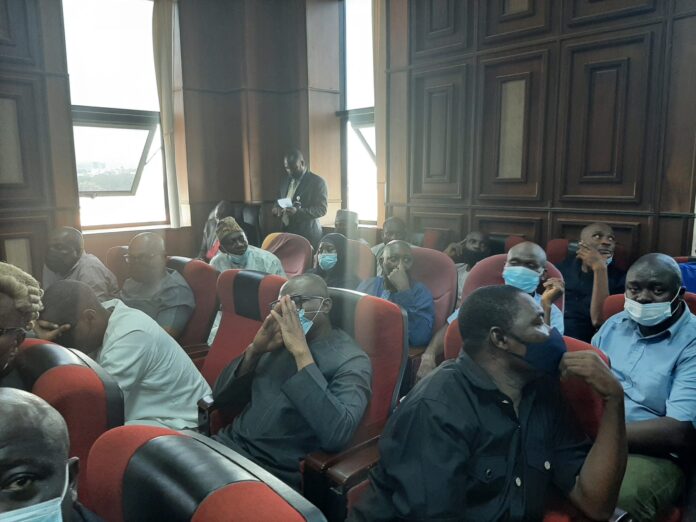 Suspects who invaded the Abuja residence of Justice Mary Odili late October were on Wednesday arraigned before a federal high court in Abuja.

Twelve out of the fifteen suspects brought before Nkeonye Maha, the presiding judge, pleaded not guilty to the 18-count amended charge bordering on conspiracy to commit felony and forgery of court documents.

The charges in suit no: FHC/ABJ/CR/436/2021 included an attempt to effect an unlawful search warrant at the house of the second most senior justice of the country, as well as a threat to her life and that of members of her household.

Five other suspects who were not in court are Sani Bala, Godwin Lucas (at large), Solomon Bagudu, Austin (at large) and Michael (at large).

Upon their arraignment, M.O. Amodu, the prosecution counsel, did not oppose the application for bail but urged the court to grant bail with “stringent conditions”.

Twelve defendants were admitted to bail in the sum of N5 million each with two sureties in like sum.

The sureties, who must be resident in Abuja, must depose to an affidavit of means and must be responsible citizens.

The court held that one of the sureties must own landed property, with original copies of the property deposited with the registrar of the court, while the second surety must be gainfully employed in Abuja, with proof of three years recent tax payment.

The registrar of the court is to verify the properties alongside their addresses.

The applicants and sureties are also to submit recent passport photographs to the court, as well as their international passports.

Consequently, the judge ordered their remand at the Kuje correctional centre pending the next adjourned date of January 17 and 18, 2022.

All the defendants are to remain in Kuje and Suleja correctional centres pending when they perfect their bail conditions.