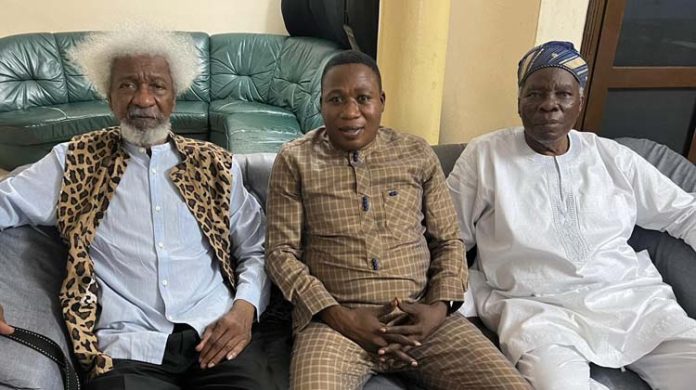 According to the Punch, the meeting took place on Sunday and also had Banji Akintoye, leader of Ilana Omo Odua, in attendance.

Details of the meeting are, however, not yet known.

In July 2021, Igboho was arrested in Cotonou, Benin Republic, over alleged falsification of his passport.

A week later, a Benin court blocked the immediate extradition of the activist to Nigeria while ruling that Igboho be remanded in prison pending further hearing.

Before his arrest in Cotonou, his house in Soka area of Ibadan was raided by the Department of State Services (DSS), after which he was declared wanted for allegedly stockpiling weapons at his residence.

Soyinka had spoken up for Igboho while he was in prison, saying the activist committed no known crime against Nigeria but instead, a criminal act was committed against him by the federal government.

He also had appealed to the Beninise government to release the separatist leader.

In March, however, Yomi Alliyu, counsel to Igboho, confirmed the release of the youth leader.

He said he had been released from prison to his medical practitioners under the agreement that he should not leave the medical centre or Cotonou for any reason.

Following his release, Igboho had called on the Yoruba at home and in the diaspora, “to embrace dialogue in their quest for self-determination without heating up the very fragile situation in Nigeria”.