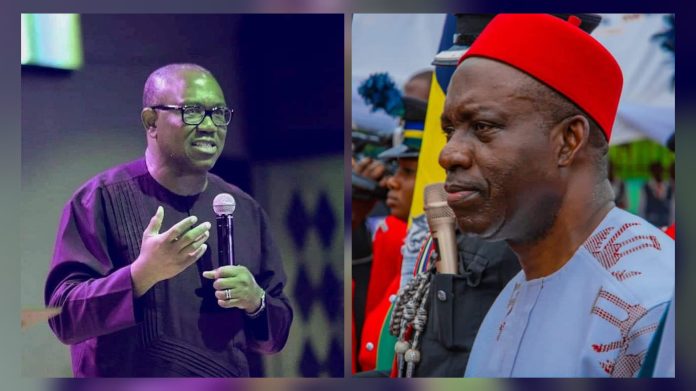 Governor Charles Soludo of Anambra State says one of his predecessor, Peter Obi, candidate of the Labour Party (LP) contesting the 2023 presidential election will not win the race.

Mr Soludo who made this known in an article he wrote in response to the backlash that greeted his remarks pertaining to the investment of the former Anambra governor, says the opposition candidate knows that he will fail, and might not come a distant third.

The governor had described the value of his predecessor’s investment for the state as next to nothing while appearing on Channels TV last week, a remark that earned him criticism from supporters of the LP candidate.

Reacting to the opprobrium, he said the race on who to succeed President Muhammadu Buhari was between the two major parties in the country – All Progressive Congress (APC) and Peoples Democratic Party (PDP).

“Peter Obi knows that he can’t and won’t win. He knows the game he is playing, and we know too; and he knows that we know,” Mr Soludo asserted. “As my brother, I wish him well and even pray for him. I told him during his courtesy call that my prayer is that he or Prof. Umeadi of APGA would win, so why not? That is from my heart, but I also told him that my head and facts on the ground led me to know that its probability is next to zero (what I cannot say before you, I won’t say behind you).

“So I already told him my opinion. Indeed, there is no credible pathway for him near the first two positions, and if care is not taken, he won’t even be near the third position.”

He described as fantasy, the suggestion that he needs no party structure to win the presidential race, citing Ekiti and Osun guber polls as case study.

“Analysts tell him you don’t need “structure” to win. Fantasy! Of course, LP won governorship elections in Ekiti and Osun on social media and via phantom polls, while getting barely 2,000 votes on the ground. Creating a credible third force for the presidential election in Nigeria requires a totally different strategy and extreme hard work.

“Of course, Peter Obi will get some votes, and may probably win in Anambra state— as “home boy”. But Anambra is not Nigeria. If he likes, I can even campaign for him but that won’t change much. From internal state-by-state polling available to me, he was on course to get 25% in 5 states as at August this year. The latest polling shows that it is down to four states, and declining. Not even in Lagos state (supposed headquarters of urban youths) where the Labour Party could not find candidates to contest for House of Reps or Senate. The polls also show that he is taking votes away mostly from PDP.”

Mr Soludo said if he were to be Bola Tinubu, the presidential candidate of the APC, he will bankroll his rival to help in dismantling the electoral strength of the PDP which Mr Obi is doing.

“Indeed, if I were Asiwaju Tinubu, I would even give Peter Obi money as someone heading one of the departments of his campaign because Obi is making Tinubu’s pathway to victory much easier by indirectly pulling down PDP. It is what it is!”

He also warned the people of South-East region that putting all their eggs in one basket might endanger them in the future.

“The current fleeting frenzy, if not checked, will cost Ndigbo dearly for years. The South East has the lowest number of votes of any region, but it is also the only region where the presidential race might be a 4-way race (it is a two-way race in the other 5 regions) thereby ensuring that our votes won’t count in the making of the next president of Nigeria.

“Afterwards, we would start complaining that we don’t get “what we deserve” or cry of marginalization. During the 2019 presidential election, the five South East States were united for PDP but contributed merely 1.6 million votes to PDP which was about the votes that Kano state gave to Buhari. The emotions might run to the heavens but politics-power is about cold calculations, organization and building alliances for power.

“In a democracy, it is a game of numbers. So far, I don’t see any of these — and 2023 might again be a wasted opportunity for Ndigbo! What is our Plan B when Peter Obi loses in February 2023? Some people prefer that we should play the Ostrich while Peter Obi toys with the collective destiny of over 60 million Igbos. Yes, you pray that he wins, but what if he fails as he is certain to?” he queried.