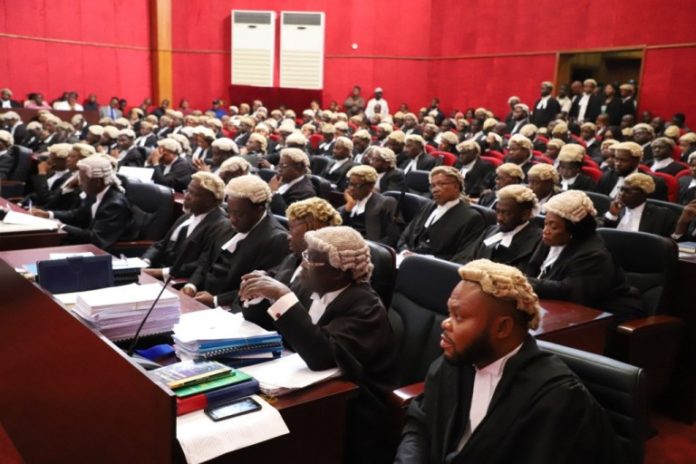 The office of the Attorney General of the Federation is the only ministerial office or department created directly by Nigeria’s 1999 constitution. Described in section 150(1) as “the chief law officer of the federation”, the attorney-general is also supposed to be the repository and defender of the country’s highest constitutional and civic values. The acronym, HAGF, for “honourable attorney-general of the federation”, assumes that the occupant of the position embodies the trinity of honour, integrity, and professionalism. Reflecting the challenging nature of the role, the office used to be occupied by persons (so far, all men) of some stature.

Taslim Elias, the longest-serving HAGF in Nigeria’s history, was a distinguished academic who took his PhD in law from the University of London in 1949, served as dean of law at the University of Lagos and went on to become both Chief Justice of Nigeria and president of the International Court of Justice (ICJ) in The Hague. Gabriel Onyiuke, who succeeded him, went on to serve as a senior judge in Tanzania before returning to a stellar career at the cutting edge of legal practice. Augustine Nnamani, who served in that same role, began life as a qualified pharmacist, before, like Elias, receiving a PhD in law from the University of London. He was also destined for the office of the chief justice before being cut down in his prime by an untimely death.

Occupants of the office of the attorney-general at both federal and state levels have sometimes paid a terrible price for taking their brief seriously. Olu Onagoruwa, who served as attorney-general to General Sani Abacha before departing the regime for irreconcilable differences with his employer, had his son, Toyin, assassinated by regime agents on December 18, 1996. On December 23, 2001, HAGF, Bola Ige, a senior advocate of Nigeria (SAN), was assassinated in his residence in Ibadan, Oyo state, where he had served as governor two decades earlier. In September 2012, Boko Haram terrorists similarly shot and killed the attorney-general of Borno state, Zanna Malam Gana, in his home in Bama.

Recently, however, the office at both federal and state levels appears to have become the exclusive preserve of cowboys imported from Lilliput. A 2020 study on misconduct in the Nigerian legal profession accused “senior lawyers and, more surprisingly, SANs” of responsibility for the most serious ethical violations at the Nigerian Bar. Some attorneys-general head the list. Alhaji Ibrahim Dan-Soho, a recent attorney-general of Katsina state, for instance, was reluctant to prosecute rape because he believed rape victims invited their fate upon themselves by how they dressed. Cyprian Akaolisa, attorney-general to Imo state governor, Hope Uzodinma, was suspended by the Legal Practitioners Disciplinary Committee (LPDC) from the practice of law for five years.

Before them, there was Michael Kaase Aondoakaa. Few people had heard of this University of Maiduguri-trained lawyer before 2007 when President Umaru Musa Yar’Adua plucked him from obscurity and appointed him HAGF. Eminently equipped with no evident credentials for the role, Aondoakaa took the office of the attorney-general to unfathomable depths of infamy. One of the first acts of Goodluck Jonathan as acting president on February 10, 2010, was to relieve Aondoakaa of his office as attorney-general. Eight months later, in October, the Legal Practitioners Privileges Committee (LPPC) suspended him from the rank of SAN because of ethical violations.

Again on December 10, 2021, the Supreme Court of Nigeria determined that Aondoakaa “had, by his conduct, undermined and subverted the administration of justice and the independence, authority and integrity of the judiciary” and “ought not to be entrusted with any other public office at all”. In effect, the supreme court barred Aondoakaa from public office again in Nigeria. The antecedents and implications of this decision should detain us a little.

Ahead of Nigeria’s 2007 general elections, political parties organized processes in 2006 to select their candidates for various offices to be contested across the country. In the Uyo federal constituency of Akwa Ibom state, the then ruling party, the Peoples’ Democratic Party (PDP) in primaries conducted in December 2006, selected Bassey Obot as their candidate to fly their flag in the contest for a seat in the house of representatives. In a country where the most consequential things are accomplished by the unknown, some unknown persons contrived to remove Obot’s name from the records of the Independent National Electoral Commission (INEC) substituting him with one Bassey Etim as the PDP candidate.

On May 15, 2009, Obot, whose judicial victory had been frustrated by the HAGF, returned to the federal high court asking it to declare that Aondoakaa had abused the office of HAGF and desecrated the independence and authority of the judiciary. On June 1, 2010, the federal high court in Calabar decided in his favour, lamenting that “the hallowed office of the HAGF has been gradually desecrated and put into disrepute with the likes of [Mr. Aondoakaa] being appointed and occupying it. It is meant for learned eminent members of the bar and not for political charlatans, jobbers or latter-day praise singers/converts….”

On September 3, 2015, the court of appeal affirmed that judgment of the high court with the hope that “that office [of HAGF] should never again be occupied by individuals of such poor quality as [Mr Aondoakaa]”. The court of appeal went further and invited the Nigerian Bar Association (NBA) “to subject [Mr Aondoakaa] to its appropriate disciplinary processes.” In his appeal to the supreme court, Mr Aondoakaa did not deny what he did but claimed that he only acted as an adviser in the letters he wrote and that the recipients were at liberty to disregard his opinion. The supreme court made short shrift of Aondoakaa’s chicanery. Describing his conduct as “reprehensible”, “reckless” and “unbecoming of the occupant of such an exalted office,” the court accused him of violating rule 30 of the rules of professional conduct (RPC) in the legal profession which requires every lawyer to refrain from doing “any act or conduct….in any manner that may obstruct, delay or adversely affect the administration of justice”.

Aondoakaa is the latest in a squalid list of senior advocates of Nigeria (SANs), whose mission appears to be to bring the supposed quality mark of Nigeria’s legal profession into inspired disrepute. Other SANs whose misconduct has recently received high judicial attention include Joseph Nwobike and Kunle Kalejaiye.

The Body of Senior Advocates (BOSAN), as the self-regarding coven of SANs is called, has proved itself to be unwilling and unable to or uninterested in bringing to account those among its members whom the federal high court colourfully described as “charlatans and jobbers”.

The rest of the Nigerian Bar watches with wonderment and young lawyers particularly now aspire with an overwhelming sense of desperation to join this coven, safe in the assurance that it will sanctify them as witches and wizards of professional impunity. To fully reflect its current evolution, it may be time for the body to upgrade its name to Body of Senior Advocates of Whatever (BOSAW).