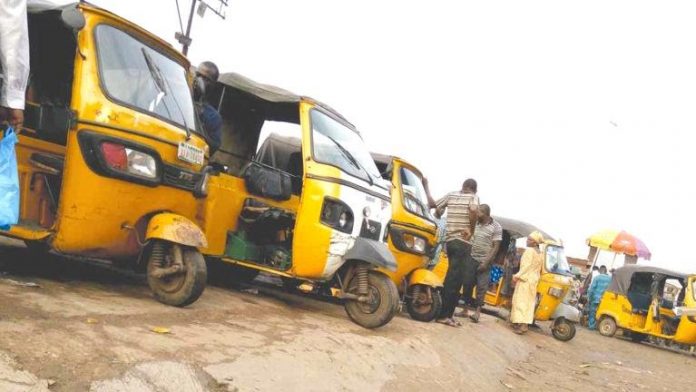 An unidentified tricycle operator was on Sunday beaten up in Akwa, the Anambra State capital, for refusing to remit the revenue collection suspended by the new Governor Charles Soludo.

Mr Soludo after taking his oath of office on Thursday suspended revenue collections in markets and parks across the state. He said the method with which it was been carried out was unproductive.

“We must, ladies and gentlemen, rid Onitsha and all our roads and markets of touts and make Anambra a pleasurable experience.

“Today, I will sign an executive order to suspend all revenue contracts operating in the parks, markets an roads until we put in place a new system within the next four weeks.”

He said as from March 18, 2022 no one should pay cash as revenue to the government in the parks, markets and roads.

He also said his administration will provide alternative opportunities to the revenue touts as the new directive may be unpopular for those benefiting from the existing system.

But The Nation reports on Sunday that the unidentified tricyclist was manhandled when touts accosted him, demanding he remits his daily fee of N200 at the park.

“The tricyclist had laughed and mocked at them, asking them to go and look for something else to be doing, as touting has expired in Anambra,” an eyewitness, Frank Akpan, explained.

“But the touts insisted and told him they were not ready for such jokes, boasting to have survived similar policies during Obiano’s administration.”

Mr Akpan added that the angry touts forcefully pulled the tricyclist out of his tricycle and threw punches on his face, resulting in swollen cheeks and blood gushing from his mouth.

Meanwhile, the Commissioner of Police, Anambra Command, Echeng Echeng, has ordered immediate enforcement of the revenue suspension order especially at motor parks and other designated places within the state, force spokesman Ikenga Toochukwu, said in a statement.

“The CP also warns all unscrupulous elements that engage in touting and other unlawful acts to desist forthwith as the Police and other security agents have been deployed around the State to arrest and bring to justice anyone caught flouting this order,” Mr Toochukwu said.

“The CP, while reaffirming the commitment of the Command towards crime prevention, restoration of law and order, enjoins Ndi-Anambra and all residents of the State to be vigilant and security conscious at all times and to report all suspicious movements to the Police,” he advised.