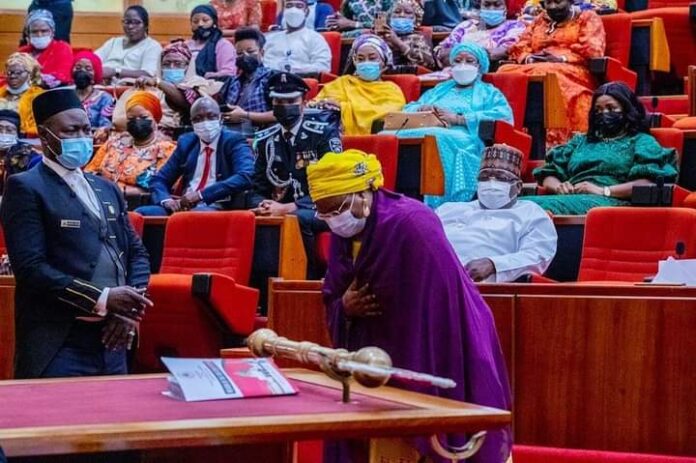 Aisha Buhari, Nigeria’s first lady, has appealed to the national assembly to reconsider the rejected gender bills promoting the interest of women in the country.

On Tuesday, the national assembly threw out legislations aimed at promoting the interest of women as regards to citizenship, indigeneship, political appointments and party leadership.

On Wednesday, various women groups protested against the rejection but were barred by security agencies from accessing the national assembly limiting their demonstration at the gate of the premises.

Mrs Buhari and wife of the vice president, Dolapo Osinbajo, had last week stormed the lawmaking premises to show support for the bills but on Tuesday during the fifth altercation of the 1999 constitution, the two chambers voted against the legislations.

In a statement on Thursday, the president’s wife urged the federal lawmakers to reconsider their stand to curb discrimination against women.

“The recent decision by the National Assembly to ignore the long-standing clamour for Affirmative Action for Nigerian women was contrary to the very high expectations of forward-looking Nigerian men and women,” she said.

“The anger of Nigerians in the circumstance is therefore understandable, more so that not a single concession was made to women, contrary to the global practice of give-and-take for which people’s parliaments are noted for.

“Notwithstanding this temporary set-back, however, I, on behalf of the wife of the Vice President, HE Mrs. Dolapo Osinbajo, join the multitude of Nigerian men and women to thank relevant UN agencies, local and international Non-governmental organisations, faith-based groups and all other stakeholders and individuals for their charitable support for fair representation by women in legislative houses, public governance and management of political parties.

“I am of the opinion that our esteemed National Assembly can still review its decision and pray that our compatriots will deeply reflect on this political, but emotive matter.

“I call on both the Senate and the House of Representatives as Husbands, Fathers, Brothers and Grandfathers to revise and reconsider reversing their conclusions so that no group, especially mothers, wives, daughters and partners who women are, would suffer discrimination, or denied of opportunities to contribute to the process of nation-building,” Mrs Buhari appealed.

Explaining why the legislations failed to scale through, Benjamin Kalu, spokesperson of the House of Representatives said lobby for the bills by Mrs Buhari and other women groups came late.

Addressing newsmen in Abuja on Thursday, Mr Kalu said the rejection of the bills shows the national assembly was not a rubber stamp of the executive as speculated in some quarters.

“I have commended all these people, who even visited the National Assembly. That is the beauty of democracy,” he said. “Because if it were not, the wives of the president and the vice president would have no business coming here. They knew that it was only through lobby, not as you have described us as a rubber stamp where they will just give us instructions—maybe the husband will give us instructions and we will get it done.

“It will be through lobbying and they participated in that lobbying with all humility. Let us not forget the Minister of Women Affairs (Pauline Tallen), who was also very dogged, and all the CSOs.

“But I must say this, the lobbying was done a bit late. Yes, I want to say that, but this lobby and advocacy ought to have started longer than now. I say that without missing words.

“You don’t lobby two days to the voting on a very important issue like this. It goes beyond lobbying at the last minute. It takes a lot of orientation. It takes a lot of advocacy. It takes a lot of sensitisation to enable people to buy into these important agendas. Do you know why? Because you cannot play down on our current issues with regards to emerging democracies, one of which is our religious disposition, our cultural dispositions. These things play a role. We are part of society. Our religion and culture is part of society. It needs a lot of advocacy by civil society organisations, women groups to push this agenda forward, it is a wonderful agenda.

“Nigerians are shifting their focus to the representatives only, it was not the senators and the representatives that did the job, and it was the instruction from their various constituents. This is the truth that must be told. If the House as an institution is not interested in the bill, it would not have passed the first reading, second reading and be allowed to go to the committee stage,” he added.