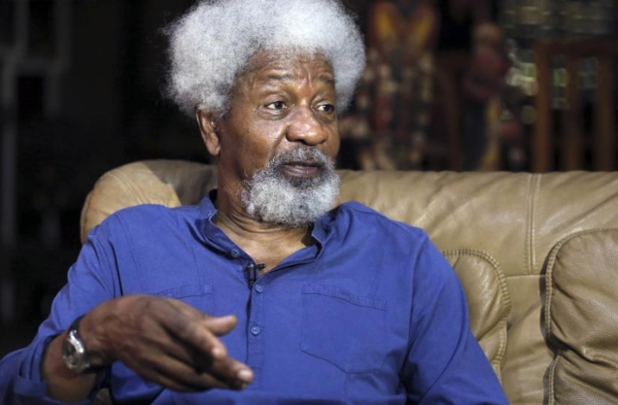 In a statement the secret police also declared the activist wanted and displayed some cache of arms allegedly recovered from his residence during the early Thursday raid.

While speaking to BBC Pidgin on Monday, Mr Soyinka said the President Muhammadu Buhari regime should apologized for the action akin to that of criminals.

“My advise to the government is that they should stop pursuing Igboho as a criminal, because you have begun by acting in a criminal fashion against him,” the novelist said. “I think they should tell Igboho ‘we made a mistake, we should not have acted in this way. You are no longer wanted, go back to your home. In fact escort him to his home and let him resume his normal life.”

The attack left automobiles and part of the land property damaged and shattered while his cat was abducted when the agency thought he might have transformed into the animal to escape arrest.

In a letter titled, “Illegal gang grossly unconstitutional invasion of Sunday Igboho Residence,’’ the solicitor stated that during the house invasion, the DSS carted away €1,000, N2m, expensive jewellery worth millions, travel documents, amulets, Igboho’s iPhone 12 and phones of about 15 others living in the house including those killed by the officers and other yet-to-be-identified belongings.

“We hereby demand that the Federal Government orders an investigation into the actions of the various security operatives led by DSS that raided Chief Sunday Adeyemo’s house with a view to sanctioning them and release all the innocent people arrested and compensate the families of those murdered.

“Our client should also be paid N500m as reparation for damage to his exotic cars that include Mercedes Benz G-Class and 2019 Lexus Car. We also demand a public apology,” the epistle partly read.