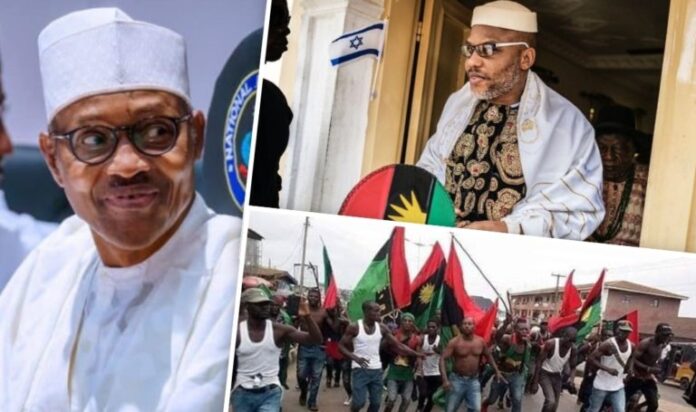 Political, traditional and religious leaders in the South-East geo-political zone has pleaded with President Muhammadu Buhari to release detained leader of the Indigenous People Of Biafra (IPOB) Nnamdi Kanu.

This is not first time they will be begging the Nigerian leader to pardon Mr Kanu facing treasonable felony and terrorism charges at a federal high court in Abuja.

Last year November, Mr Buhari had assured the Igbo leaders during a meeting at the presidential villa, Abuja, that he will consider their plea although their demand, according to him, was heavy and runs contrary to the separation of power enshrined in the constitution.

He later refused granting their plea, saying there will be no political solution to the demand and that the judiciary process on course should be allowed to run uninterrupted.

The president is in Ebonyi State where he is on a two-day working visit. At a meeting with Mr Buhari on Friday, the leaders of the third largest ethnic group in Nigeria beckoned on him to show mercy on the secessionist leader like he recently did to former governors jailed for stealing public funds running into billions.

“We plead with you to tamper Justice with mercy in the case of our son Nnamdi Kanu,” the Chairman of Southeast Traditional Rulers Council, Eze Charles Mkpuma, said on their behalf, while reading an address.

He said the leaders have began discussing with aggrieved groups with aim of getting them to come to a roundtable discussion for an amicable resolution so that peace will return to the troubled region.

Eze Mkpuma also called on the president to support and ensure his successor after the expiration of his tenure next year comes from the Igbo tribe.