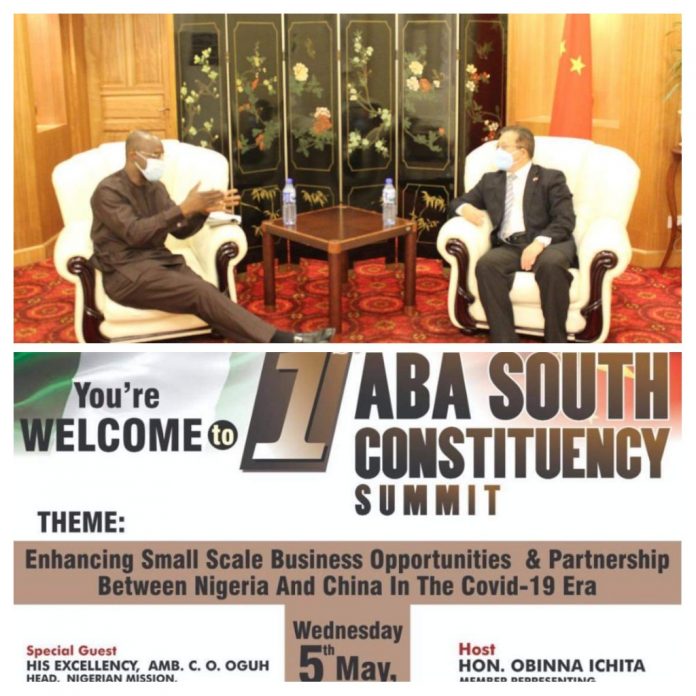 I am not a trader, but being an Abiriba man and an old Bende in Abia North off spring, l recognized the fact that my people are mostly traders. Not only that, l and my siblings were trained with traders sweat. You see the reason why l am so deeply committed to this Honourable Obinna Ichita project? The Abia South State House member with this project touched the nerves of my backbone.

If you recall, l just heard about the first Aba South Constituency Summit which was geared towards establishing a more bilateral business relationship between international traders in Aba and China, that was held on Tuesday 5th May 2021 at Enitona Hotel Aba, Abia State. And, for reasons stated above, l picked interest and attended. I attended without even knowing who Hon. Obinna was personally. The only time l heard about him was when he showed unusual humility after the death of Reps Ossy Prestige.

The summit which was convened by the Member Representing Aba South State Constituency in the Abia State House of Assembly Hon Obinna Ichita had His Excellency Amb C.O Oguh, head , Nigerian Mission, Shanghai, China as the special guest of honour and the crem de la crem of Aba International business men and women in attendance. It was an interactive session availed Aba international business men and women the opportunity to table some of their complaints as with regards to doing business with China to Amb Oguh.

Some of the complaints made by the traders were the inability of the traders to access Visa to China, importation of sub- standard goods from China, importation of lesser amount of goods paid for from China , denial of receipt of payment from some Chinese business partners and inability of the traders to have direct contact with the manufacturers in China without going through the middle men. The traders also frowned on the high cost of visa at the embassy, especially as it concerns those coming from Aba, they pointed out that while their contemporaries from the North pays a little some of N38,000 ( Thirty Eight Thousand Naira) , they pay over N500, 000 ( Five hundred Thousand Naira) to access their own visa .

In his response, Amb Oguh , Head Nigerian Mission , Shanghai, China carefully addressed the issues raised and pointed out that he will liaise with the office of Hon Obinna Ichita to ensure that their complaints are sent to the appropriate quarters . He assured the traders that his office will always be open to assist them to have a smooth business transaction in China. The traders thanked and appreciated Hon Ichita for the thoughtful idea .

I made a post on my wall about the submit and it’s outcome and a lot of our people across the nation and West/Central Africa expressed happiness but, they expressed one solid fear. Let it not be the usual political tricks by politicians to play their usual film tricks and keep the electorate busy till the next election. Will Hon. Obinna follow it up? They asked.

Hon. Obinna proved that he’s not the usual promise and fail politicians when through the invited guest at the summit he followed up the peoples demand. Ambassador Oguh true to promise met with the Chinese Ambassador as he promised, about the visa and other issues

The Chinese Ambassador His Excellency Ambassador CUI Jianchun. promised to review their demands to ensure that multiple entry visas are issued to our genuine businessmen and women once the restrictions are relaxed. He also promised to assist in the investigation of the cases of fraud as alleged by the participants at the summit. In fact, the Chinese Ambassador asked that names of those affected should be compiled. It is now left to those who complained of fraud and other unethical business practices against their Chinese partners to provide any evidence of transaction to enable the Nigerian Mission in Shanghai, China follow up on the matter using the diplomatic channel.

It’s very important to note that though this summit was organized by the Aba South State House member Hon. Obinna Ichita, his constituency are just going to be a micro benefit of the positive outcome. The decision of one Chinese Ambassador to intervene is going to benefit the entire business people in Nigeria, who are dealing with the Chinese.