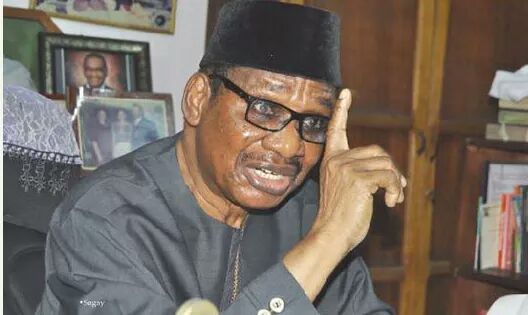 Itse Sagay, the Chairman of the Presidential Advisory Committee Against Corruption, says there is nothing wrong if politicians jailed for stealing billions of naira are granted presidential pardon.

Mr Sagay, a Senior Advocate of Nigeria (SAN) stated this while reacting to the decision of President Muhammadu Buhari freeing former governors, Joshua Dariye and Jolly Nyame, of Plateau and Taraba states respectively.

The duo, both sentenced in 2018, were prosecuted by the Economic and Financial Commission (EFCC) for 11 years and barely served up to half of their sentence when they were granted pardon on Thursday.

While Mr Dariye was sentenced to 10 years imprisonment for stealing N2billion from state coffers, Mr Nyame was jailed for 12 years for siphoning similar amount while he was governor.

They are both members of the ruling All Progressive Congress (APC) which has severally vowed to pardon politicians prosecuted for corruption once they join their fold.

Under its seven years reign, Transparency International, a global body monitoring corruption fight in over 100 countries, said the country was sinking deeper in corruption, with the federal government clapping back each time the indicting reports are released annually.

Defending the president who chaired the National Council of State meeting, an advisory board made of past and present leaders in the country which has no constitutional powers to impose or override presidential decisions, where the decision was taken, Mr Sagay said the president may not have pardoned the APC members and 157 other influential Nigerians alone.

“The President didn’t do it alone but with the Council of State,” the professor told PUNCH. “I am sure it must have been a consensus. It is not such a terrible thing as people are saying. Four years in prison is tough. Some of us may not survive a month in prison.

“They have faced humiliation and loss of status, falling from Government Houses to prison. So, I don’t think there is anything wrong if they are being pardoned,” he justified.

He disagreed that the pardon had political undertones, saying the pardonees freed on age and health grounds were not active party members.

“No, I can disagree with this entirely. These people are not active party men anymore. When they are pardoned, for 10 years they cannot participate in politics. So, they are of no consequential advantage to the President or any party. I don’t think it’s a party matter,” he added.

In his reaction, a Senior Advocate of Nigeria (SAN) and Human Right lawyer, Femi Falana, said with the action of the president, the war against corruption had officially come to an end.

“They are pardoning themselves now. The same man, who said he came to fight corruption, has been granting pardon to people who were convicted for stealing billions of naira,” Mr Falana noted. “My reaction is that all criminals and petty thieves should be released since Section 17 of the Constitution says there shall be equal right for all citizens and Section 42 says there shall be no discrimination on the basis of class, gender or whatever.”

Speaking earlier in Lagos, the lawyer vowed to mobilise his colleagues, whose clients are serving jail terms across the nation, for a protest should the administration that claims to be fighting corruption fails to grant pardon to petty thieves serving jail terms.

“A Nigerian was jailed for stealing noodles in Abuja, he was not granted state pardon,” Mr Falana recalled. “If you want to pardon your friends, you must extend that pardon to other people in the spirit of equity and fairness.”