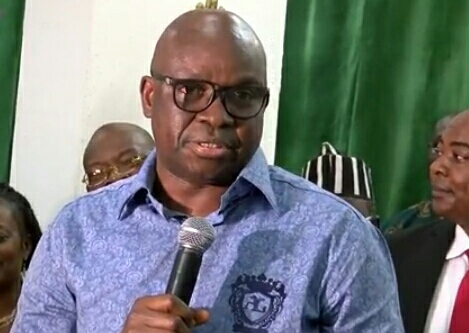 Ayodele Fayose, former governor of Ekiti State, has told his successor to face the challenges of the office he was elected into.

Mr Fayose stated this is response to the allegation of Kayode Fayemi, Ekiti State governor, that the refusal of the former governor to pay workers in the state civil service regularly led to them being owed N57 billion as wages.

Mr Fayemi who took over power last year, stated this at a meeting he had with civil servants as well as a cross-section of labour leaders at the Government House, Ado Ekiti, Tuesday.

The governor said the development of backlog which is been tackled in phases by his administration was caused while his predecessor held sway.

Responding, the former governor asked the incumbent to tackle the issues for which he was elected into office other than complain about the past administration in the state of which he held sway.

“I read without surprise & as usual @kfayemi usual brandishing of figures owed Ekiti workers & retirees by my administration,” Fayose said in a tweet.

“Without joining issues with him,rather than public service announcement, I enjoin him to pay the workers.Moreso he was “voted” for to do what I couldn’t do,” he added.