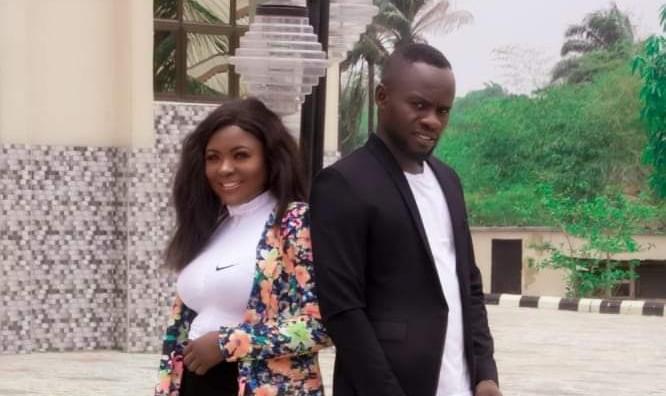 Ozioma Michael, the lady that called off her wedding three days before the planned event, has denied the abortion claims slammed on her by her fiance, David Okike.

Miss Michael had alleged that her supposed husband, was full of uncontrolled rage and has severally assaulted her, hence the shocking decision.

Denying the domestic violence allegations against him, Mr Okike, said his fiancee did several abortions without his approval and had postponed their marriage ceremony thrice.

Denying the abortion claim is Miss Michael popularly known as Ada Uburu on Facebook. She said what her accuser termed abortion were miscarriages which occurred as a result of domestic violence unleashed on her by the man who has paid for her bride price.

A photograph she posted on the social network Saturday morning shows her being hospitalised, alongside scan results of the miscarriages both from private and public hospitals.

She also alleged being beaten on the day Osinachi Nwachukwu, the assaulted gospel artist, died.

Her response to the abortion claims is reproduced below.

DAVID OKIKE I AM NOT YOUR ENEMY.
SORRY I CAN’T MARRY YOU.

Ma’am Osinachi Nwachukwu 😭
You didn’t die in vain, God used you and saved me, I will always remain grateful.

I wasn’t strong enough to Call Off the wedding at first, my intentions was, I am already in this mess, if eventually we got married and everything keep being Bad if God wishes we will go our separate ways. That was why at some point I started fighting for “Court marriage” which with both the help of our church pastor and my supposed husband’s immediate elder sister he accepted to do the court marriage with me.

But the unfortunate coincidence happened!!!

That same day Minister Osinachi Nwachukwu death surfaced the internet, it was the same day My supposed husband beat me again mercilessly and it was his immediate elder sister that even pushed me into their own room and locked the door in order to protect me, I wouldn’t expect them to be truthful about if their brother always beat me or not after all my supposed husband is their only son and brother.

After the BEATING I went to my father’s house, it was there that my little sister called and was like mum said David beat you again, I didn’t say anything. She went ahead and told me to check the internet that the Popular singer who sang Ekwueme is dead, and they said she was killed by her husband just the way David is beating me.

She asked me something that made me cried : Sis, do you remember our sister, your own immediate elder sister that died have you ever seen her again? She still went ahead to ask me did you finish University Education to go and die?

I bluntly told her I don’t have MB which she immediately shared to me..

My heart was shattered not just only for Minister Osinachi Nwachukwu’s death but for myself seeing my death and because of what people will say I am trying to walk through it.

So that night I didn’t sleep I got a rethink .

I decided that if my supposed husband will be the only man that will marry me on earth, it’s better I remained and die single.

Already I went to Obiozara police station to seek for Advice, I told them I am not here to arrest anyone but I am so confused and I need an advice. After narrating my story and showing my wedding IV to about 3 top police officers and they advised me to leave the village if at all I am no longer interested to marry the said guy, that marriage is not by force.

I planned leaving the village immediately even without telling anyone not even friends or relatives because I knew they’re going to talk me into staying back.

In Igbo land there’s what they called “FREE BORN and NOT FREE BORN” (Ohu/Amadu). According to them He is Not a “Free Born” and they cannot give their daughter who is a Free Born to him for marriage without a fighter. And this whole thing delayed the approval of the marriage. It surprises me that my supposed husband always sounds as if he’s not from Igbo land and knows nothing about Igbo tradition.

Anyways because of the love I have for him I told him not to worry that I am going to marry him whether anyone support me or not, after all I don’t believe in any form of Segregation or discrimination. I divided my family into two just to be with him, I fought everyone just because of him, I disrespected everyone just to marry him, until I convinced my mother to back me up, thanks mum for always being there for us, for me😭and I am so sorry mum that I failed you🙏🏿.

Back to the subject matter, after all my fight and I succeeded for the marriage to hold he turned against me.

He kept beating me in any little provocation, because he knew I don’t have anyone to talk to, after all at first my family asked me not to marry him that it’s against tradition and I decided to disobey everybody, all my family and friends turned their backs on me. At that point I don’t know who to talk to, all I always do is to call the Chairman of our kindred to report to him how my supposed husband has been abusing me.

Even when I took in I will tell him to give me even if it’s a little space like a month before S*X, so that I won’t miscarry but he won’t rather he will drag with me and end up beating me.

He practically caused all the miscarriages I went through by his BEATING and not even having a common self control.
It was never an Abortion, it was miscarriages (2)
And I have my EVIDENCE.

That was the pregnancy that I miscarried last year due to his Violence and Rage which he said Teaching Hospital Abakaliki Aborted his baby without his concept.

If the Hospital have CCTV, it will be recorded right there because it was her eldest sister Juliana Okike who accompanied me to the hospital.

Why did she accompanied me and not my supposed husband?

He kept giving excuses, babe wait next week, next week that never finishes.

Women who had witnessed miscarriages will tell you how painful and heartbroken it is to know that you’re carrying nothing and you’re still carrying it…. My good people in my own case my supposed husband kept delaying everything, I kept begging him that even if he doesn’t want to go with me to the hospital that his eldest sister Juliana Okike is a health worker, he should send her with me, after everything he accepted.

Now tell me How did I went to the hospital without his Consent and do Abortion? 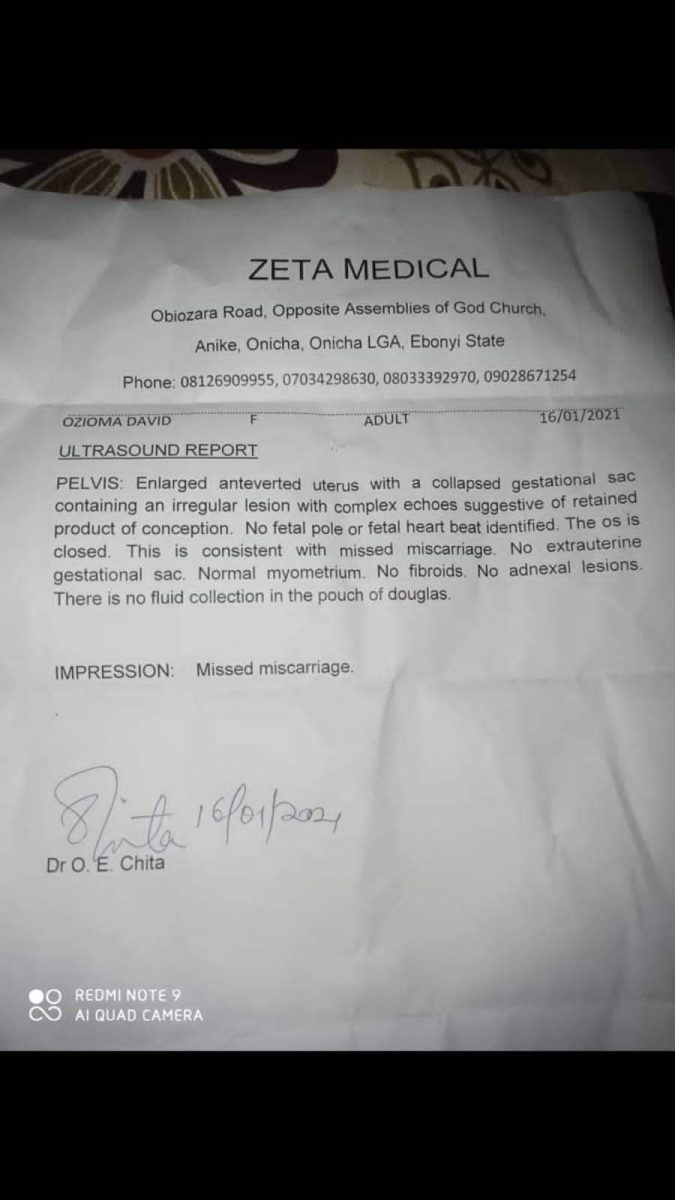 It was a Miscarriage😭 and only God knows what I went through.

PS: It’s better for me to Live without anyone believing my Truth than for me to die proving Nothing.

This my photo here was taken by his eldest sister Juliana Okike at the hospital with my own phone.

Please guys be kind to my picture, I never knew we are going to sleep over in the hospital that day so I didn’t remember to go there with my Wrapper.

I have made my DECISION and THERE’S NO CHANGING IT.

Guys: my supposed wedding Day is my SURVIVAL DAY.

HAPPY SURVIVAL DAY TO ME💃💃💃💃