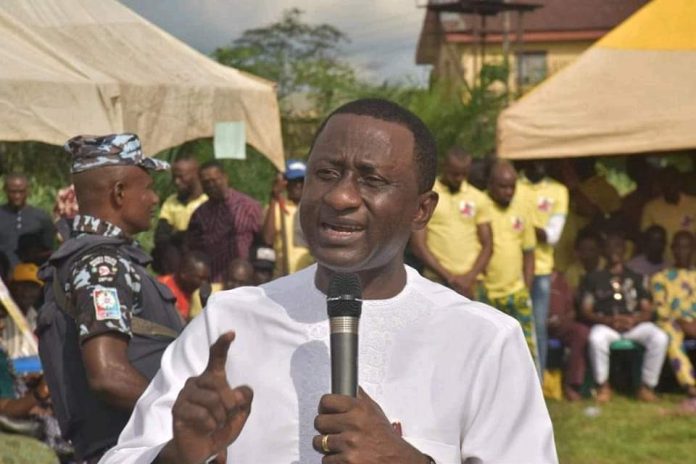 Standing firm on due process of all the confusions following the political confusion that’s leading to primary electoral crisis in the nation. Abia State being the first state by alphabetical order showed a good example of how things should be done to avoid any legal cumbersome in the future. The immediate past Minister of State for Mines and Steel Development, Dr. Uche Ogah was declared winner of Abia State APC governorship primary election. In one of the most perfectly organized gubernatorial primaries in the history of the nation.

There was no room for monetary indictment as the NEC of APC gave a directive that power to elect the governorship candidate of Abia State APC be thrown to the people. In was in this process that Uchechukwu Sampson Ogah was declared the winner of the direct primary election which took place in the 184 wards in the 17 local government areas of the state by the returning officer, Barr. Perfect Okorie in the early hours of Friday in Umuahia.

Others who participated at the direct primary election include, Ikechi Emenike who polled 9,446, Emeka Atuma with 7,429 and Obinna Oriaku with 5,553.

Alex Otti who has moved out of the party was still very popular as he got a sympathy votes of 2,414 as Daniel Eke who got 1,953.

According to Okorie, the outcome of the election is a reflection of the total will of the people of Abia State.

For the records, Chief Ikechi Emenike going against the clear written directives of the NEC committee of APC, which is the highest decision taking organ of the party. (See attached order) Parading his own outdated letter that looked forged was announced the winner of an indirect primary election which took place in Umuahia the state capital. This is in total disobedience of the directives of the highest national body of the party. The Emenike letter literally imposed him as the sole governorship candidate of the party. The letter looks so comical that at first sight, you will see desperation of a loser afraid to face challenge clearly spelt across the page.

However, Ogah and other aspirants had kicked against the indirect primary adopted by the Ikechi Emenike faction, stating that it is in contravention with the directive of the national leadership of APC.

They insisted that Abia, Benue, and Osun were listed to adopt the direct primary as a way of enhancing inclusion.

The electoral amendment process that has been causing confusion could have been settled if other states had taken the APC example in Abia, Benue, and the Osun States.

Yes, l criticize APC every day, but that shouldn’t blind me to the truth when I see them do something that looks wonderfully perfect. I hit hard on PDP too when they blunder.

People like Uche Ogah the President of Master Energy who has established a multiple investments in the state that’s worth hundreds of billions are the type of people we should look beyond party affiliation and encourage into leadership. The path others preach and promised they have shown by good example.

Congratulations APC Abia for getting it right amid all these electoral confusions the amended electoral process throws on us.