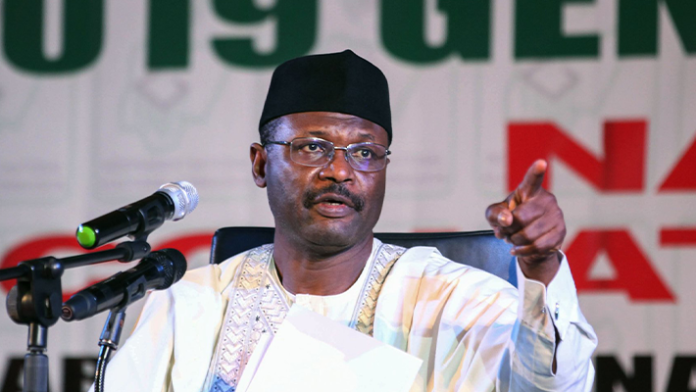 INEC chairman Professor Mahmood Yakubu is straight-up one of Nigeria’s most intelligent public servants. I know because I interacted with him when we both lived in Kaduna. He taught history at the Nigerian Defence Academy in Kaduna at a time that I was a reporter at the Weekly Trust, which was headquartered in Kaduna.

He used to visit Weekly Trust editor Malam Isyaku Dikko who was his colleague at the Usmanu Danfodiyo University. On occasions during his visits, we had stimulating intellectual and social exchanges that caused me to ask Dikko about his friend.

Yakubu not only has an unrivalled First Class degree in history from the Usmanu Danfodiyo University in Sokoto, he also went on to get advanced degrees in the subject (again with distinction) from Cambridge and Oxford universities.

It’s not his credentialing that bowls me over; what impresses all who know him outside the mediation of the media is his razor-sharp wit and his perspicacious intellect. As a professional historian, and a top-rate one at that, I thought he would be self-conscious of the judgement of history.

Unfortunately, he showed no such consciousness in his conduct of the 2019 presidential election. He did no better than Maurice Iwu who had had the dubious honor of being Nigeria’s most compromised INEC chairman.

Yakubu allowed his visceral antipathy toward an opposition presidential candidate and his loyalty to the late Abba Kyari (who facilitated his appointment) to cause him to rig the election for Muhammadu Buhari. Buhari lost the actual election by close to two million votes.

Tremendous pressure was brought to bear on Yakubu to subvert the election in favor of Buhari. Buhari’s henchmen pressured Yakubu to cancel the results of the election in the Federal Capital Territory where Buhari lost in almost every polling unit and to inflate figures in the Southeast and the South-south where Buhari fell short of the constitutionally required 24 percent of the vote.

In the end, Yakubu plucked figures from the air and randomly assigned them to presidential candidates and declared Buhari “winner.” INEC, which budgeted more than a billion naira for a “central server” for the election, couldn’t tell a straight, coherent lie about this server, making INEC one of Nigeria’s most legal criminal organizations.

More than three years after the election, Yakubu’s INEC still has not had the courage to share the raw data of the election with the public—like Professor Attahiru Jega’s INEC did in 2015—such as a granular breakdown of all the votes cast in all the polling units nationwide. It’s because the numbers won’t add up. The numbers won’t add up because they are not even remotely faithful to the outcome of the votes cast on Election Day.

In the aftermath of the election, even EU observers said INEC had degenerated precipitously from its 2015 standards.

Now Yakubu has a chance to redeem himself. The 2023 election is almost upon us. Thankfully, Abba Kyari, who puppeteered him, is no longer alive. Nor is the incumbent who appointed him running. So, this is a great opportunity to create a level playing field.

The 2023 election promises to be intense, competitive, and unpredictable in unexampled ways. And only the sincerity and transparency of INEC’s handling of the election will ensure a peaceful transfer of power. Fortunately, apart from the fact that his benefactor is no longer here to dictate to him, Yakubu is not held in check by anxieties about a second term. This is his last term in office.

So far, I’m impressed with the independence, assertiveness, and transparency that Yakubu and INEC have demonstrated. They have given me cause to hope that the election will be conducted fairly, but we can’t be too complacent.

I particularly like the fact that INEC insists that all political candidates for elective offices turn in their nominees by the first week of June. That means voters will have ample time to scrutinize candidates until Election Day in February.

In the past, nominees were submitted to INEC in November and elections took place about two months later. That was why Atiku Abubakar won his party’s nomination in November last year and then holed up in Dubai until a few days before the election.

Well, like I did in 2019, I am again appealing to Mahmood Yakubu to be sensitive to the judgment of history and do the right thing in 2023. That might help redeem the grave moral indiscretions he committed in 2019.
Buhari’s Daughter Has Joined the “Solutions” Brigade
Muhammadu Buhari’s daughter, Zahra Buhari-Indimi, was reported on April 13 to have said on Instagram that ”Criticism without offering viable solutions and alternatives for me is just noise,” joining Buhari Media Center (BMC) trolls who started and popularized this puzzlingly puerile thought.

From about the midpoint of 2017, it appeared as if Buharists got afflicted by a social media obsession that asks critics of the government to offer “solutions” to every problem they bring to light. Ironically, most of the people who ask for “solutions” can’t even see the “solutions” if the “solutions” stare them straight in their faces.

It’s as simple as that. If you need that to be spelled out for you, it means you’re not putting the resources of your brain to optimal use, in which case even a million “solutions” would be useless to you.

A more productive use of the energy of Zahra and the BMC trolls her father’s regime recruits to harass critics would be to challenge elected people to implement “solutions” already offered to several problems over the years.

Alternatively, they should ask elected and appointed leaders to request the “solutions” from people who lay out the problems so that we would at least know that our solutions are solicited by people who have the capacity to implement them. Of course, they can’t do that because they grovel in worshipful awe before the powers that be.

Most importantly, though, most of the people who ask for “solutions” aren’t really interested in any solutions; they merely want to deflect attention from the problems that government critics highlight. They’d rather that critics not make their idols look bad. That’s all this is about.

I suspect that it’s a talking point developed by the Buhari Media Center to shut down or blunt criticism. But it’s a remarkably retarded strategy.