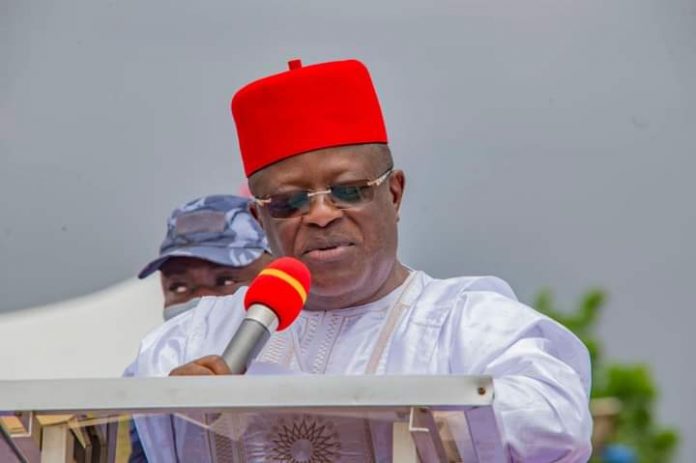 Governor David Umahi of Ebonyi State has advised the All Progressive Congress (APC) to throw the presidential ticket of the ruling party open to contestants from other geo-political zone if it is not zoned to the South-East region.

Mr Umahi, who gave the advise on Friday while featuring on Channels TV, urged the party to ignore the recent request of his Ondo State counterpart, Rotimi Akeredolu, who chairs the Southern Governors Forum (SGF) for zoning of the ticket the South.

He said a situation where Southern governors will unite to demand for power shift on the basis of equity but will not micro-zone it to the South-East which has not tasted power since the return of democracy in 1999, was no longer acceptable.

Under the Peoples Democratic Party (PDP) the South-West has produced the president in the person of former President Olusegun Obasanjo from 1999 to 2007 (8 years), while former president Goodluck Jonathan from the South-South completed the first term of his late principal, Umaru Yar’adua (2 years), contested and won the 2011 general election (4 years).

Mr Umahi argued that the crowded aspirants from the South-West indicated that the region was tasking the North to hand over power on the basis of equity but not willing to do same in micro-zoning in the Southern part of the country.

“We cannot be honest by half,” the Ebonyi helmsman said. “But when the south cannot handle it (zoning) on the basis of equity, fairness and justice, then we should continue to suggest that we shouldn’t blackmail the north; we shouldn’t deceive ourselves.

“This thing (ticket) should be thrown open because if there is no zoning, then you have no right to continue to agitate that the north cannot contest.

“We cannot be used to drag presidency to the south and then we are shortchanged. So we should be part of such agitation if such fairness and equity cannot be ascribed to us. That is the position of most leaders in the South-East.

“I’m not asking that people from the South-West should not run; it is their constitutional right. But I want to say that we have worked together, the southern governors said presidency should rotate to the south, but on the basis of equity, fairness, and justice we had the South-East in mind, since the South-East never tested it.

“Now it has become clear that the platform upon which we collectively asked the north to concede the presidency to the south is no longer the same platform upon which the realities are based; then it’s fair and just that we should allow anybody in the country to run,” he added.