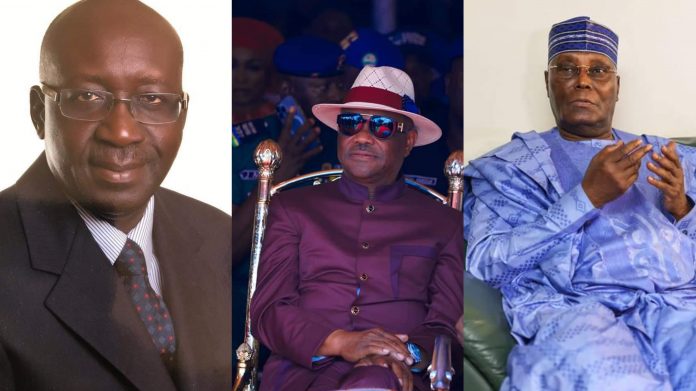 Governor Nyesom Wike on Friday narrated how Iyorchia Ayu, national chairman of the Peoples Democratic Party (PDP), frustrated him from emerging the presidential candidate of the opposition party.

Mr Wike leads Southern politicians in PDP demanding the ousting of Mr Ayu who vowed to resign from office should a fellow Northerner like himself emerge the party’s flag-bearer but has remained defiant in fulfilling the promise.

The aggrieved camp are insisting he must step down as a requisite for the return of peace in the PDP or fight to finish, which amounts to the party going into the election without a united front.

In a media chat with selected journalists aired on Channels TV, the Rivers helmsman insisted that the removal of the embattled opposition chieftain remains the only route to solving the crisis therein.

He recalled how Atiku Abubakar, winner of the presidential primary whom he trailed behind, agreed with him in a meeting outside the country that the national chairman must go but returned to tow a different path from what was agreed.

Narrating how Mr Ayu frustrated his presidential ambition, he explained that some of his rivals received a call from the PDP henchman, pressuring them to step down for Mr Abubakar which Governor Aminu Tambuwal of Sokoto, another aspirant, did and was described as the hero of the convention.

“There was nothing Ayu didn’t do,” Mr Wike recalled. “Manipulation of delegates list.

“A whole national chairman threatened some of the presidential aspirants at that time that if Wike wins, he was going to resign.

“In fact, he was calling aspirants to withdraw for Atiku Abubakar,” he alleged.

The governor has maintained that he will not defect from the party but will stay therein to finish the fight against leadership lopsidedness where the presidential candidate, national chairman and director-general of the campaign are all from the Northern region, which according to him, is against the spirit of zoning which has being the practise in the party.