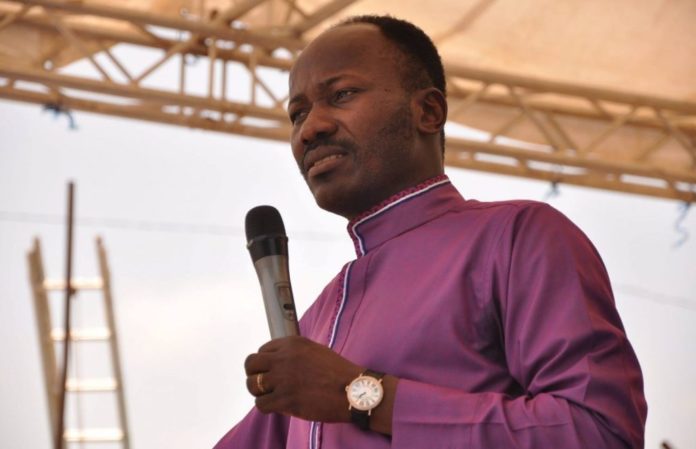 Johnson Suleman, the general overseer of Omega Fire Ministries, has reacted to the recent move by the federal government to increase the fine for defaulters spewing hate speech.

Information Minister, Lai Mohammed was recently quoted by TheCable as saying President Muhammadu Buhari has approved the upward review of fine for hate speech from N500,000 to N5,000,000.

Mr Mohammed was said to have stated this while inaugurating a committee with the sole aim of initiating reforms and legislative actions to regulate the online media.

Some Nigerians, including the cleric, has reacted to the decision, claiming it aimed at silencing opposition voices.

For the helmsman of the Christian assembly, the fine should be backdated to 2014 when the now ruling All Progressive Congress (APC) was in the opposing camp.

Their argument is that the present administration rode to power through hate speech thrown at the then ruling but now opposition Peoples Democratic Party (PDP).

“Just read about N5m fine for hate speech…there is a thin line btw freedom of speech/hate speech..this is a deliberate attempt to silence people..we could back date its implementation to 2014,” Mr Suleman said in series of tweets on Friday.

“What they should be against is unverified news..fake news been peddled..not ‘speech’..this is quiet draconian and ill-timed..by stopping fake news,the media will be sanitised..but with this,every voiced opinion seen as confrontational will be tagged ‘hate speech’.

While warning leaders about power being transient, the cleric suggested that spreading false information should be looked into rather than silent dissent voices.

“What should be addressed is fake news..lies been peddled.unverified stories..that way,there will be media-sanity..but with this,every voiced opinion that appears confrontational to govt will be tagged ‘hate speech’…leaders,always remember you won’t be in power forever,” he added.