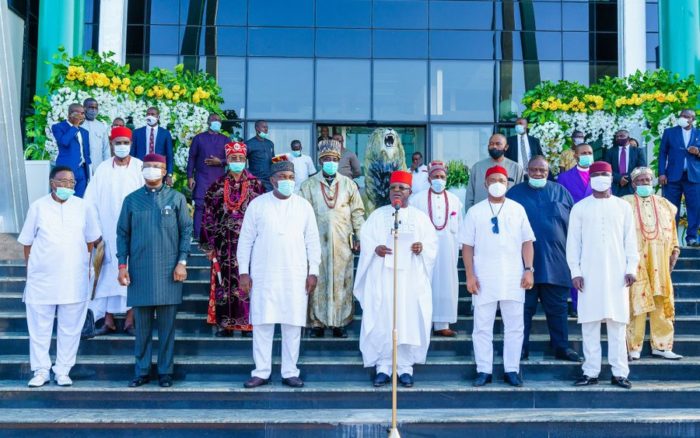 The Igbo National Movement, INM, has expressed their disagreement with the Governors of the South East region in their communique over the weekend condemning the activities of Igbo youths.

Reading the communique after their stakeholders Forum meeting, the Chairman of the South East Governors Forum, Engr. Dave Umahi said they’re not with the youths in their clamour for secession.

Chief Peter Agba Kalu, the National Coordinator (Nigeria); Okoro Chinedum Benedict, Assistant Coordinator; and Barr. Eze Eluchie, theLegal Adviser, INM disassociated themselves “from the press release of the South-East Governors and their condemnation of the Igbo Youth. While we agree with the statement to the extent that Ndigbo are a peace-loving people, the tone of the press release suggests a willingness to sell-out our youths in a manner that leaves our people open to derision in a manner unprecedented in the annals of the Federation.

“We demand that these Governors, as our elders and leaders, read in-between the lines and see these latest provocations for what they are. We do not want to believe they may they have deliberately refused to do so, out of a fear of their political ambitions or for fear of reprisals from the Federal Government. This dereliction of duty, should it continue, will not be forgotten by Ndigbo.

“Any rebuke of our youth must not be divorced from the history of marginalization that has necessitated their discontent. No other political leadership has so willingly thrown their own people under the bus like these Governors have just done. We, therefore, stand strongly with our deeply hurt, and many-times-betrayed youths, whose demand for a system and leadership based on Justice, Equality and Merit is a call that finds resonance not only with Ndigbo, but across the Nigerian Federation, in and amongst other ethnic nationalities.

“Ndigbo are the most travelled of all the ethnic groups in Nigeria. Ndigbo are the largest non-indigenes of every state in Nigeria. There is no history of violent conflicts, which have been initiated by Ndigbo, between us and our host communities. Even when we are attacked without provocation, we have always sought peace and maintained a peaceable existence with our neighbours. This is because Ndigbo are builders, investors, and developers by nature. We understand what it is to build a nation and we always seek a conducive environment to prosper.

“No Nigerian government which believes in truth and justice would ever antagonize such a peace-loving people. It is laughable to suggest we be tagged as aggressors in our own lands, where what we have built has been through our own blood, sweat and tears, with little or no help from the Federal Government following the utter destruction of the civil-war, with reconstructive efforts limited to a ‘poverty-fund’ of £20 per person. From these we have risen to build our cities today which are under threat from the military.

“We know that the violence that took over our streets recently was sponsored by external forces, as it is clear that no single Igbo man or woman has been brought to trial or even charged for any of the events that necessitated the military’s involvement. It may be a case of tagging an innocent dog a bad name in order to kill it, but we will leave that judgement for other citizens to make on our behalf.

“For the records, Ndigbo have over 3,000 years of history as indigenous people living in our area of the South-East of Nigeria. In all that time, we have never fought to conquer or rule any nation. We have no territorial ambitions outside our homelands and have no need for ‘grazing’ lands beyond what we are able to purchase for ourselves with legal tender.

“Ndigbo love peace, unity and progress, hence our adage, “Egbe Bere Ugo Bere, Nke Si Ibe Ya Ebele, Nku Kwa Ya” (simply put, “Live and Let Live”). The land Igbos build on, or settle in, are legally acquired (even at extremely high cost). All the estates our people have developed were legally acquired. To deny this in favour of a narrative that seeks to compare us with nomadic peoples who have neither sown nor built on the lands they traverse is mischievous at best or perfidious at worst.

“We rise to affirm the rights of every indigenous people in Nigeria to seek self-determination, even as we believe it is our fundamental human right as Ndigbo to do so, through non-violent means, in accordance with International Law, the United Nations Charters and the Nigerian Constitution.

“No nation prospers in injustice,” the statement reads in part.