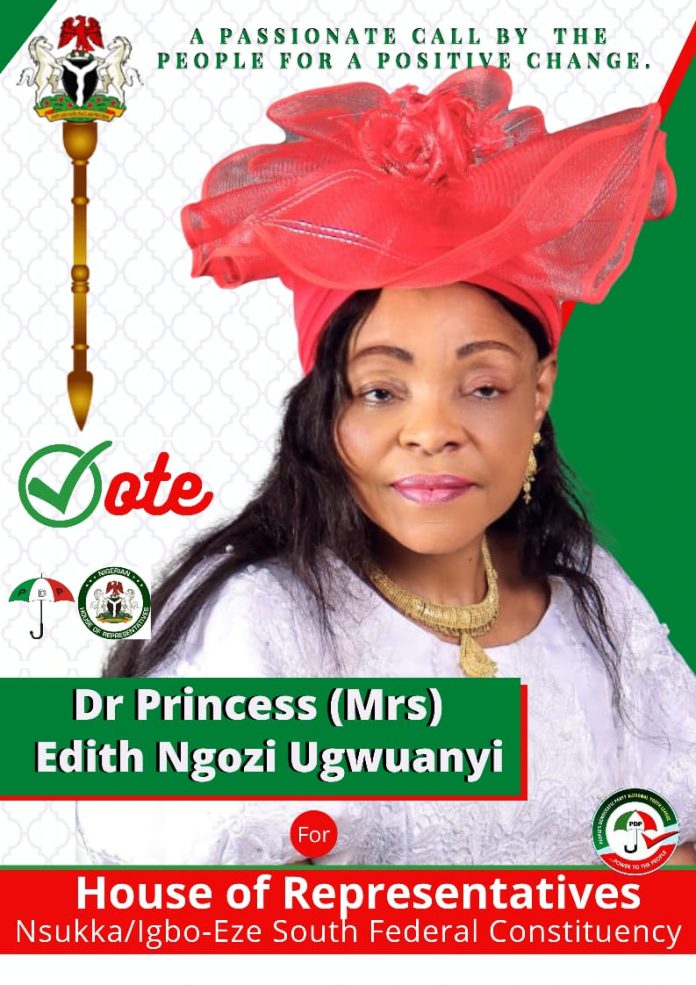 Ahead of the primaries of the Peoples Democratic Party, PDP, a frontline political advocacy group- Enugu League of Women Voters, ELWV, has called on the delegates of the party to cast their votes for Dr Princess Mrs Edith Ngozi Ugwuanyi.

The group said Princess Ugwuanyi stands out and with her, the good people of Nsukka/Igbo-Eze South Federal Constituency will be well represented because she has the requisite experience and exposure, needed to be at the Green Chamber.

In a statement made available to newsmen, the convener of the group, Nwada Eberechukwu Rita Anigbogu said Princess Ugwuanyi needs to be supported by all and sundry as she has dared all the odds and determined to break the bias.

“For us at Enugu League OF Women Voters, the aspiration of Dr. Princess Ugwuanyi is a project because her success will be to the benefit of all women and Ndi Enugu in general. We’re supporting her not only because she’s one of us, but she’s qualified both academically and otherwise.

We’re presenting a Dr of Health Administration with over 28 years experience working in the United States who has always had interest in the advancement of Enugu State. She has served as Vice president, Enugu provincial union in USA and President of Umuada wawa In USA, thus, this is a woman that has dedicated herself to our people.

“Princess Ugwuanyi has the needed exposure and connection to attract projects for her Constituency and the state and her integrity is unmatched. The delegates owe it as a duty to ensure they secure their future and send her to Abuja to speak for them and they can go home and sleep while she does the work in their interest.

“She’s not a greenhorn in Enugu politics either, when she returned to Enugu in 2011, she joined the PDP and became an integral part of the party, supporting at her ward, local government and state levels.

“She’s also an astute supporter of the Governor and serves as the state coordinator GUPM- Governor Ugwuanyi’s Progressive Movement- the largest political support group of the Governor which she formed in 2016.

“As a special Adviser to the Governor and her involvement in political activities in the past decade, we are confident she has garnered the requisite experience to navigate through the murky waters of Nigeria politics,” the statement said.

Nwada Anigbogu also disclosed that their group has been working tirelessly, meeting the delegates on the need to support Princess Ugwuanyi while assuring that they will mobilize their members from across the state to campaign for her when she picks the ticket of the PDP.