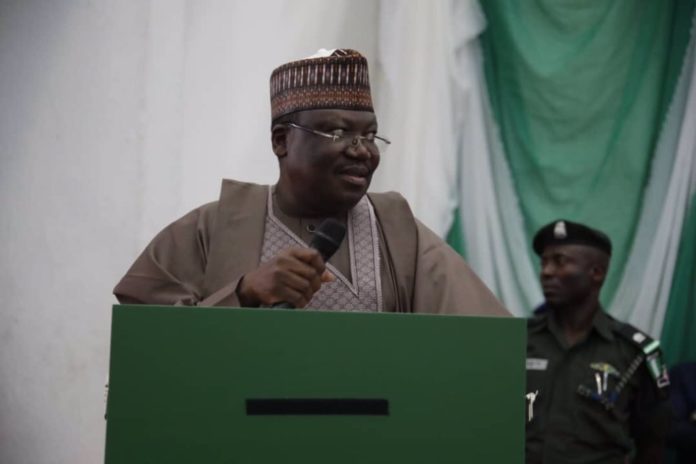 The Nigerian Senate under the leadership of Ahmad Lawan has warned Nigerians against referring to the red chamber as a rubber stamp legislature.

Mr Lawan who gave the warning in an interview with Daily Trust Newspapers denied that the Senate under him was a rubber stamp.

He disclosed that the red chamber has clash with the executive arm of government headed by President Muhammadu Buhari but decided to settle it secretly.

Due to the roles played by the president in getting him to head the legislative arm of government, Nigerians often refer to the the Senate under his leadership as a willing tool in the hands of the president. The Nigerian leader pressurized an aspirant who was interested in the position to withdraw.

He was attempting to avoid a repeat of what transpired at the formation of the 8th Senate with Bukola Saraki emerging Senate President against the wish of the ruling All Progressive Congress (APC).

Mr Saraki described as the cog in the wheel of progress during the first term of the incumbent administration lost his re-election bid.

The rubber stamp description further gained momentum when the upper legislative chamber skipped protocol during the screening and confirmation of ministers.

Another point often quoted by critics is that the National Assembly under Lawan approves loan requests of the president without properly scrutinizing it.

But in the interview with the national daily, the Senate President said the cooperation with the executive was for the best interest of Nigerians.

“Do you know that we have disagreed with Mr. President, the executive arm of government, many times? People don’t know, because what we have adopted is to go behind the scenes and solve our problems,” Mr Lawan said.

“I have also witnessed better service delivery to the people when there was cooperation and mutual respect between the two arms.

“I think I will be unfair to myself, to the people and to the senators who elected me to choose right from the beginning to just fight in the name of independence of the legislature.

“I believe in the independence of the legislature more than people think. Now they say we are a rubber stamp assembly.

“What people don’t know is that there is nothing that in the opinion of the Senate or national assembly that will jeopardise the liberty of our people or against the interest of the majority of Nigerians that we will do.

“Call us anything, if you like, not rubber stamp, call us steel stamp or whatever it is. I can tell you, today this senate has done, in the last count, 27 confirmations.

“Tell me, if we didn’t do those confirmations; tell me how governance will be carried on? There will be so much arbitrariness, maybe ministers will take advantage of where they are to supervise; there could be a lot of abuse. So, we shouldn’t confirm people? If we confirm it is rubber stamping,” he queried.