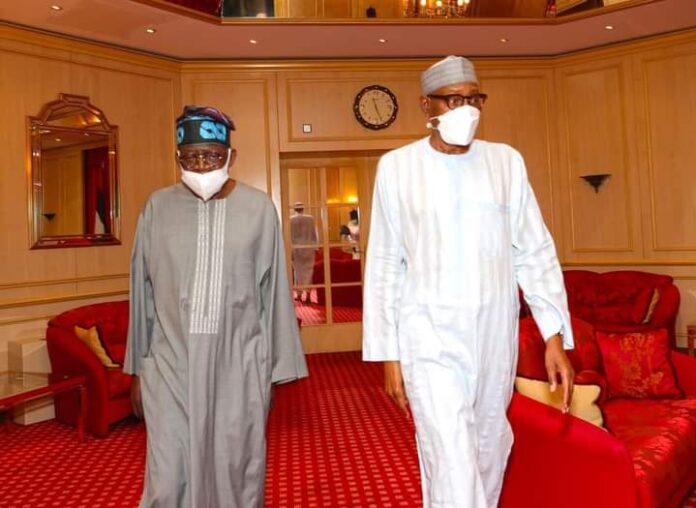 A quotation in which Bola Ahmed Tinubu called Muhammadu Buhari a “bigot” and an “agent of destabilization” has resurfaced on social media and is being shared by people who are opposed to Tinubu’s presidential aspirations.

But Tinubu supporters are countering the quotation with a February 7, 2020 rebuttal by Tinubu’s media aide by the name of Tunde Rahman who said “the quote is fictitious” and “the handiwork of merchants of hate and fake news.” He also challenged people to provide evidence for where Tinubu ever said those words.

In my February 8, 2020 column titled “Unkind Things US Diplomatic Cables Reported Tinubu to Have Said About Buhari,” I took up Tunde Rahman’s challenge and showed that Tinubu indeed said what he was quoted to have said—and worse.

In response to requests from people who missed the column when it was first published, I am sharing a slightly modified version of it again. I should add that it was Reuben Abati, Goodluck Jonathan’s media adviser, who, in a December 29, 2014 tweet, first brought attention to what Tinubu said about Buhari.

“‘Buhari and his ilk are agents of destabilization.’ – Bola Tinubu. Has this CHANGEd? Source: Public Library of US Diplomacy, Wikileaks Cable 2003 February 21, 15:09 #Friday Interesting….,” he wrote.

But the quotation that has been making the social media round goes thus: “Muhammadu Buhari is an agent of destabilization, [ an] ethnic bigot, and [a] religious fanatic who if given the chance would ensure the disintegration of the country. His ethnocentrism would jeopardize Nigeria’s national unity.” I have seen slightly different lexical variations of this quote, but the essential sentiment is unchanged.

Even before Abati publicized it, I’ve been familiar with it since 2011 because I combed WikiLeaks at the time for material on Nigeria. Since Rahman was bold enough to “challenge those behind it to mention where Tinubu made the remark,” let me offer some help.

Tinubu didn’t say those words at a news conference, as some people have inaccurately claimed. He was quoted to have said them in a confidential diplomatic cable that the United States Consul General to Nigeria sent to his bosses back home on Friday February 21, 2003.

We got to know this because, in September 2011, WikiLeaks—the insurgent, whistle-blowing, official-secret-spewing site—dumped a trove of 251,000 such confidential, unredacted cables that US embassy officials sent to the US State Department in Washington D.C. from all over the world.

In the February 21, 2003 confidential cable, which can be found here, the US Consul General to Nigeria reported Tinubu to have said Buhari was an ethnocentric agent of destabilization who would strain Nigeria’s unity if he became president.

He also said the Southwest would support Obasanjo against Buhari—which it did—because Tinubu and his group didn’t want the spread of Sharia, which Buhari supported and which Obasanjo countered, and because even though Obasanjo was unlikeable, he was Yoruba and Buhari wasn’t. Looks to me like Tinubu was guilty of the same crime of “ethnocentrism” he accused Buhari of.

The cable reads: “Turning to the presidential contest, Tinubu disclosed that he does not like President Obasanjo because he contributed to the end of democracy in Nigeria during his tenure as a military president and is now benefiting from that history.

“That said, Tinubu admitted that he and his party, the Alliance for Democracy, must support Obasanjo. Southwest Nigeria is Yoruba land and the President is Yoruba. Tinubu”s [sic] party had no choice since it has not fielded a presidential candidate. Moreover, Obasanjo is the only candidate who stands a chance of blocking his rival, General Muhammadu Buhari, whose ethnocentrism would jeopardize Nigeria”s [sic] national unity. Buhari and his ilk are agents of destabilization who would be far worse than Obasanjo.

“Tinubu and many other governors are therefore implementing a strategy to re-elect Obasanjo, partly in an effort to prevent Sharia from spreading. Tinubu predicted that the President will follow his own course, if re-elected, since he will not need as many friends the second time around.”

Incidentally, Tinubu had really kind words to say about Atiku Abubakar throughout his interactions with the Consul General. “Tinubu praised Vice President Atiku Abubakar, whom he has known for many years,” the Consul General wrote. “Elaborating on his knowledge of the VP, Tinubu said he has known and understood the VP even before his entry into politics. Atiku is a detribalized politician who knows where he is going and how to build bridges to get there.”

The Consul General also wrote that, “Tinubu credits his going into politics to Atiku’s personal encouragement.” You won’t guess that going by the way they and their agents tore at each other—or at least pretended to— in the last presidential election.

Anyway, my search of WikiLeaks’ archive with the keyword “Bola Tinubu” turned up several other unflattering characterizations Tinubu made of Buhari to Americans.

For instance, in a September 14, 2005 “secret” cable, US Consul General Brian L. Browne wrote that Tinubu wanted to be vice president to either Atiku Abubakar or Muhammadu Buhari but was self-conscious of the perception that either option would present the country with a Muslim-Muslim ticket and reiterated the sentiment that Buhari’s perception as a “religious zealot” made teaming up with him unviable.

“While Tinubu did not see this [i.e., being vice presidential candidate] as a big problem with Atiku (due to Atiku’s noted religious laxity and his pro-Western outlook), it would be a heavy cross to bear for a Buhari-Tinubu ticket because of the perception in many southern Nigerian minds that Buhari is a religious zealot,” Browne wrote. “Because of this factor, Tinubu asserted he had begun to shift his focus, which had been exclusively on the vice presidency, to see the Senate as a nice place to land upon exiting the governor’s mansion.”

Again, in a confidential cable sent on Thursday April 12, 2007, the Consul General reported Tinubu to have described Buhari as a “fascist” during an April 9, 2007 meeting.

“Tinubu stressed he had no qualms about PDP presidential candidate Umaru Yar’Adua winning the election,” the Consul General wrote. “Yet, Tinubu was adamantly opposed to ANPP presidential candidate Muhammadu Buhari. In a recent news story, Buhari called the PDP government ‘fascist’. Tinubu sarcastically mentioned that he would take Buhari’s ephitet [sic] as being accurate, for who better to identify a fascist than another one.”

As I wrote in my September 24, 2011 column titled “What the WikiLeaks Controversy Says about Nigeria’s Leaky-mouthed Elite” in the aftermath of WikiLeaks exposes of the diplomatic cables, the willingness of our elites to divulge unsolicited information about the nation to U.S. officials “betrays an infantile thirst for a paternal dictatorship.

“The United States is seen as that all-knowing, all-sufficient father-figure to whom our elites run when they have troubles. We have learned from the US embassy cables that our Supreme Court judges, Central Bank governors, even vice presidents and governors routinely run to the American embassy like terrified little kids when they have quarrels with each other.”

“What I’ve found particularly instructive,” I added, “is that our perpetually lying politicians suddenly become truthful, honest, and straight-talking people when they talk to Americans. You would think they were standing before their Creator—or at least before a stern, omniscient, no-nonsense dad who severely punishes his kids for the minutest lie they tell.”

After the revelations became public knowledge in 2011— and the embarrassment that attended this— Nigerian politicians dismissed them as “WikiLeaks’ beer parlor gossip.” Of course, that’s intentionally misleading flapdoodle.

As I pointed out at the time, WikiLeaks was not the author of the embarrassing information about them; the uncomfortable bits of information about them, which isn’t exclusive to Nigerian politicians, were contained in U.S. diplomats’ dispatches, which were intended ONLY for the consumption of the US president, the US Secretary of State, and other high-profile government officials but which WikiLeaks exposed to the rest of the world at the cost of tremendous discomfort and embarrassment to the US government and embassy officials.

I don’t know what exactly Tinubu’s media adviser is denying. The truth is that Buhari’s people are already acutely aware of Tinubu’s honest opinions of Buhari and find his latter-day pandering to them, in a bid to earn their support for his 2023 presidential ambition, both theatrical and entertaining.

For the rest of us, though, his media aide’s forceful denial of that which is already archived in the public domain proves English journalist Francis Claud Cockburn’s famous quip that you should “Never believe anything until it has been officially denied.”