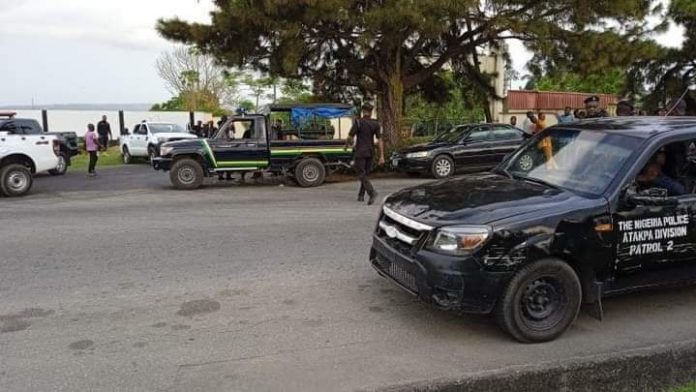 The Nigeria Police Force (NPF) on Tuesday took over the premises of the Cross River State House of Assembly while blocking its entrance.

Staff members were turned back from the premises while being cautioned not to loiter around the vicinity.

This comes a day after a federal high court in Abuja ordered the sack of State (18) and federal (2) lawmakers for dumping the platform which they were elected on.

The decampees had dumped the Peoples Democratic Party (PDP) and followed the state governor, Ben Ayade, to the All Progressive Congress (APC), last year.

While delivering judgment, Justice Taiwo Taiwo said they ought to vacate their seats having left the platform that saw them elected.

In the judgment, the judge dismissed the defence argument that the PDP (plaintiff) had no locus standi (legal rights) to institute the case.

He also dismissed other preliminary objections raised by the sacked lawmakers.

The judge ordered the PDP to forward their replacements to the Independent National Electoral Commission (INEC).

Meanwhile, Justice Taiwo will on Friday determine the fate of Governor Ayade of for dumping the political party which he was elected on.

In the suit filed by the PDP, marked FHC/ABJ/CS/975/2021, the party through its counsel, Emmanuel Ukala (SAN) is asking the court to order the sack of the governor for the defection.