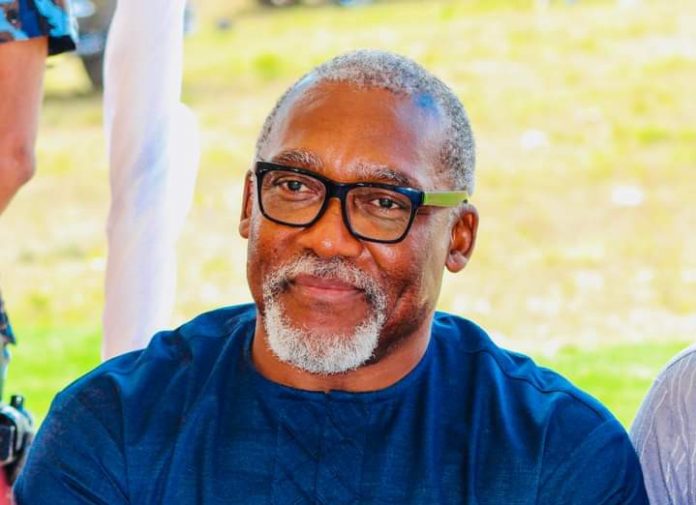 In the first suit, whose crux is the defection of Governor Umahi and his Deputy from the PDP to the APC, the Court ordered Umahi and his deputy to vacate their seats, and restrained both of them from further parading themselves as Governor and Deputy Governor of Ebonyi State, respectively.

In the other suit, the Court sacked and declared the seats of 15 of the 24 member Ebonyi State House of Assembly vacant, on the same grounds the Governor was removed.

At this point, let me thank our party, the Peoples Democratic Party for the expeditious manner they have taken steps to give effect to the judgment of Justice Inyang Ekwo. This important first step was taken by the party when they submitted the names of Hon. Iduma Igariwey and Fred Udogu to INEC, as Governor and Deputy Governor respectively, to replace Governor Umahi and his deputy, in compliance with the order of Court.

Apart from the order directing Governor Umahi and his deputy to vacate their offices, the court, inter alia, also directed INEC to immediately receive from the PDP the names of its candidates to replace Governor David Umahi and his Deputy, and to declare those names submitted by the PDP, as the Governor and Deputy Governor of Ebonyi State.

While we acknowledge that INEC is in receipt of the communication from the National Chairman of the PDP, we call on INEC as a critical pillar of our constitutional democracy, to comply expeditiously with all the consequential orders of the court, particularly, by declaring the names submitted by the PDP as Governor and Deputy Governor. This, the INEC is expected to do, by issuing Certificates of Return.

From the clear and unambiguous order made by Justice Inyang Ekwo, it is an incontrovertible fact that Governor Umahi ceased to be Governor of Ebonyi State on the 8th day of March 2022. Two days after this judgment, Mr Umahi and his deputy still parade themselves as if they still occupy those offices. This is, to say the very least, contemptuous of the clear orders of a court of competent jurisdiction. We recognise the fact that former Governor David Umahi has a right of appeal. However, until the entire appeal process is exhausted, and in the absence of any order staying the operation of Justice Ekwo’s Judgment, Mr Umahi remains sacked, a former Governor, who should desist from any conduct that threatens the peace of Ebonyi State, or diminishes over constitutional democracy.

In the eye of the law, therefore, I, Rt Hon. Iduma Enwo Igariwey and Chief Fred Udogu, are the recognised Governor and Deputy Governor of Ebonyi State, respectively, effective the 8th day of March 2022.

At this point, let me take liberty and address some of the very disturbing comments credited to Mr Umahi in his official reaction to Justice Ekwo’s twin Judgments. Umahi’s reaction, by way of a speech titled “I am still the Governor of Ebonyi State” was, true to Umahi’s imperial character, a cocktail of attacks, insults, intemperate and highly incendiary expletives, against a judge of competent jurisdiction and the Judiciary as an institution. Umahi had described Justice Inyang Ekwo’s judgment as “purchased”, vowed not to obey the judgment, called on his supporters to disregard the judgment, to “laugh over the judgment”, a “useless judgment” by a “hatchet man”.

Although many well-meaning and patriotic Nigerians have called out Umahi to condemn his wild and incomprehensible incivility, yet, to us Ebonyians, we understand too well that imperial Umahi was only being himself. Have Nigerians suddenly forgotten Umahi’s many battles with the press in Ebonyi State? Just about a year ago, Umahi “banished for life from Ebonyi Government House”, a number of journalists – Peter Okutu, Chijoke Agwu and others – for writing stories he did not like. In 2021, Umahi sent thugs to attack a sitting court in Abakaliki and chase away other judges from their court rooms, for delivering judgment he considered not favourable. It stands to reason that geographical distance is probably what is saving Justice Ekwo from Umahi’s physical assault and harm. This is unacceptable and disgraceful, to say the very least.

Yesterday and today, former Governor Umahi, in continuing contempt of Justice Inyang Ekwo’s judgment which had since removed him from office, is further depleting the scarce resources of Ebonyi people by bussing poverty stricken Ebonyi people from their villages to the state capital, to demonstrate against Justice Ekwo’s judgment. For Ebonyians who know him very well, this is vintage David Umahi. He will deploy all manner of subterfuge and blackmail, to hang unto power, in clear contempt of the order of court that has since removed him from office

To Ebonyi people, your joy and jubilation across the length and breadth of the state upon news that David Umahi has been sacked came to me as no surprise. It is, indeed, a new dawn! You have suffocated enough, and your freedom is near. I assure you that the Party will deploy every legal means to actualise your freedom as symbolised by Justice Inyang Ekwo’s judgment. The era of running Ebonyi State as Umahi, sons and brothers Nigeria Ltd, is soon over. The days of indiscriminate arrests, kidnappings, disappearances and murder in secret detention facilities in Ebonyi State Government House, will soon be a thing of the past.

I urge Ebonyi people to remain calm and peaceful, and go about their normal livelihoods, while civil servants are encouraged to remain vigilant. Security Agencies, the Police, DSS and NSCDC are urged to secure the state by protecting lives and property. This also includes government Property and assets.

Finally, on a personal note, I and my Deputy would like to thank our great party, the PDP, and our stakeholders from Ebonyi State, for the honour of submitting our names to INEC. We feel honoured, and assure the party and Ebonyians, that the task of redeeming and rescuing Ebonyi State from former Governor Dave Umahi’s brigandage and misrule, is a mission that must be quickly accomplished.

Thank you and may God continue to bless Ebonyi State.