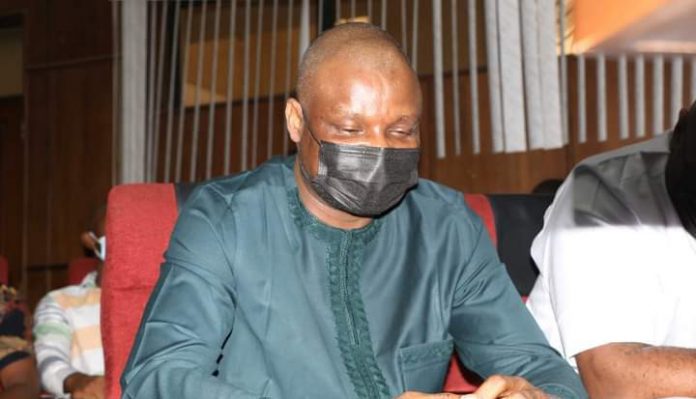 A federal high court in Abuja on Monday ordered the transfer of embattled Deputy Commissioner of Police (DCP) Abba Kyari and six other suspects who are jointly facing drug related charges to Kuje Correctional Center.

The judge held that the National Drugs Law Enforcement Agency (NDLEA) prosecution team has placed sufficient materials before the court to warrant the refusal of bail to both senior police officers.

Other Defendants in the charge marked FHC/ABJ/57/2022, are; ASP Bawa James, as well as two drug traffickers that were arrested at the Akanu Ibiam International Airport in Enugu, Chibunna Patrick Umeibe and Emeka Alphonsus Ezenwane.

Meanwhile, Justice Nwite ordered accelerated trial of the Defendants, even as it fixed April 28 for the review of facts in respect of the case against Umeibe and Ezenwane.

It will be recalled that Umeibe and Ezenwanne, who were cited as the 6th and 7th Defendants in the charge, had on March 7, when they were arraigned alongside DCP Kyari, pleaded guilty to the drug trafficking charge against them.

The court had on Monday, listened to arguments from both the Prosecution and the Defence, on NDLEA’s application for the review of facts in respect of the two Defendants, to enable their conviction and sentencing.

Kyari’s lead counsel, Kanu Agabi, SAN, had contended that it would be prejudicial to his client for facts of the case to be reviewed and decision reached on it, while the trial is still subsisting.

He made reference to cases where Defendants, out of ignorance, pleaded guilty to a charge against them.

“It is not in the interest of justice for the facts to be reviewed while the trial is still ongoing”, he argued.

More so, Agabi, SAN, noted that both Umeibe and Ezenwanne were also mentioned in some counts in the charge that involved Kyari and the other accused police officers.

The NDLEA had in the charge before the court, accused DCP Kyari and the other four officers of conspiracy, obstruction and dealing in cocaine worth 17.55 kilograms.

It alleged that Kyari and his men unlawfully tampered with 21.25kg worth of cocaine that were seized from the two apprehended drug traffickers, Umeibe and Ezenwanne.

The police officers were said to have committed the offence between January 19 and 25, 2022, at the office of Inspector-General of Police (IGP) IRT, Abuja, in connivance with one ASP John Umoru (now at large), contrary to section 14(b) of the NDLEA Act, CAP N30 Laws of the Federation of Nigeria 2004.

Kyari was said to have attempted to bribe a senior officer of the NDLEA with $61, 400. 00 at a restaurant in Abuja to prevent the testing of part of the cocaine that was seized from the two arrested drug pushers.

On the other hand, the agency alleged that the duo of Umeibe and Ezenwanne, conspired with one IK that is currently at large, to import 21.35kg of cocaine into the country without lawful authority and knowingly possessed same, and thereby committed an offence contrary to and punishable under section 11(d) of the NDLEA Act, CAP N30 Laws of the Federation of Nigeria 2004.