Sheikh Nuru Khalid, the suspended Chief Imam of the Apo Legislative Quarter Central Mosque has been expelled by the committee of the religious body.

Mr Khalid was suspended days ago after criticising the administration of President Muhammadu Buhari over rising insecurity ravaging the country.

The clergyman had while reacting to the attacked Abuja-Kaduna train last week Monday said press statement from the presidency condemning the attack was not enough.

He urged Mr Buhari to visit the victims of the deadly attack where eight persons have been confirmed dead while hundreds of other passengers are still missing.

Reacting to his suspension at the weekend, the suspended Imam said he was unperturbed, having learnt about his suspension in the media and vowed to continue speaking the truth, daring those who perceived his sermon as inciting to show evidence.

The expulsion of the cleric is contained in a letter signed by the chairman of the mosque committee, Senator Saidu Muhammed Dansadau.

“We regret to inform you that from today the 4th day of April 2022 you have been disengaged from the services of the above-mentioned mosque,” reads the epistle. “This action is occasioned by the non-remorseful attitude you exhibited following your suspension on 2nd April this year.

“Akaramakallah you know better than me by the teachings of Islam , the essence of administering punishment is to correct behavior.

“Unfortunately, your media reaction response to the suspension creates the impression that you are not remorseful, not to talk of humbly reflecting on the consequences of your utterances,” it read in part. 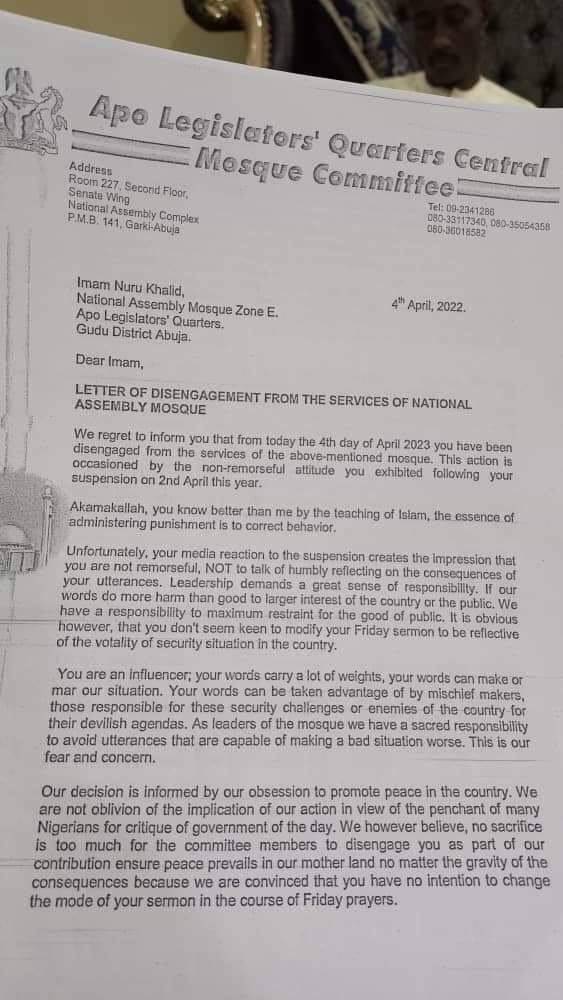