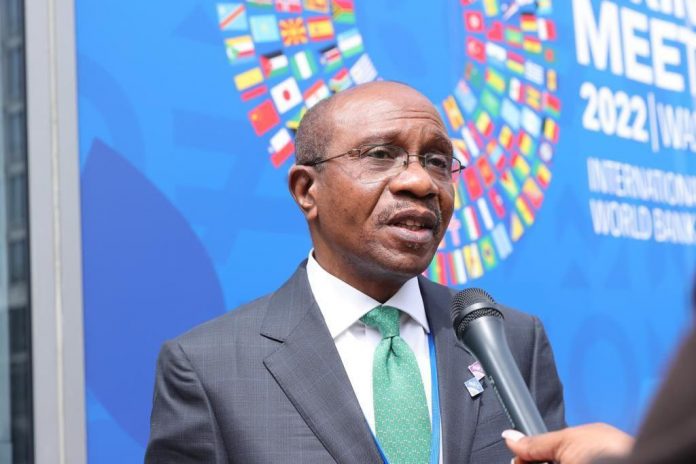 President Muhammadu Buhari has ordered Godwin Emefiele, the governor of Central Bank of Nigeria (CBN) to resign his position and pursue his presidential ambition.

Mr Emefiele jostling to succeed Mr Buhari had his prayer to retain his seat while politicking struck out at a federal high court earlier in the week.

Nigerians and civil society groups have called on him to resign but he has paid deaf ears to their demand.

The resignation order, also issued to ambassadors and takes effect immediately, is contained in a memo from the Secretary to the Government of the Federation (SGF) Boss Mustapha and marked SGF/OP/ I/S.3/XII/173.  Appointees with political ambitions in ministries and heads of government agencies are also affected.

“For the avoidance of doubt, this directive affects all Ministers, Heads and Members of Extra-Ministerial Departments, Agencies and Parastatals of Government, Ambassadors as well as other political appointees who desire to contest for elective offices,” reads the memo.

“For smooth running of the machinery of government and our foreign Missions, affected Ministers are to hand over to Ministers of State where they exist or to the Permanent Secretary, where there is no Minister of State. Ambassadors shall hand over to their Deputy Heads of Mission or the most Senior Foreign Service Officer in line with established practices.

“Similarly, Heads of Extra-Ministerial Departments, Agencies and Parastatals are to hand over to the most senior Director/Officer as may be peculiar to the organisation, in line with the service wide Circular No. SGF.50/S. Il/C.2/268 of 4th December, 2017,” it added.

The president, yesterday, ordered his ambitious ministers to step down from office. So far, Godswill Akpabio and Ogbonnaya Onu are those who have complied with the demand kick-started by Emeka Nwajiuba, junior education minister.