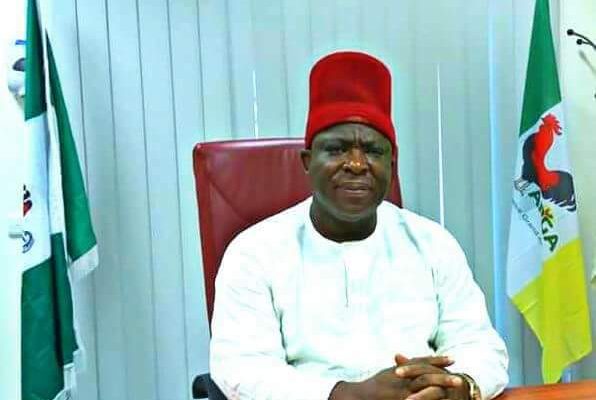 Victor Umeh, a former national chairman of the All Progressive Grand Alliance (APGA) has confirmed as true the narration of Bianca Ojukwu, widow of late Biafran warlord Odumegwu Ojukwu, who was involved in a scuffle with Ebele Obiano, wife of immediate-past Anambra governor.

Video clip which trended online showed that while the inauguration of Governor Charles Soludo of Anambra State was ongoing Thursday morning, Mrs Obiano left her seat and approached Mrs Ojukwu and a melee involving the duo occurred shortly.

Narrating what transpired to Arise TV in a statement a day after, Mrs Ojukwu said she gave her attacker a dirty slap in self-defense for verbally using unprintable words against her.

She also claimed to have perceived stench of alcohol from the former Anambra first lady when the latter came close to her and that might have influenced the attack.

Her account came moments after the former governor who was arrested in Lagos Thursday evening by the Economic and Financial Crimes Commission (EFCC) was transferred to the Abuja headquarters of the anti-graft agency alongside his wife, Ebelechukwu.

Mrs Obiano is still not reachable to give her own account for what transpired at the low-key inauguration in Awka, the state capital.

Confirming the narrative of Mrs Ojukwu as true is Mr Umeh who described the scuffle as unimaginable, regretting that the incident overshadowed the story of Mr Soludo’s inauguration as governor.

“From Ambassador Bianca’s narrative, she was correct in her narration of what actually happened,” Mr Umeh confirmed to the television station on Friday.

The politician who was at the venue explained that Mrs Obiano came in hours after the arrival of the former governor, and sat on a different seat away from her husband, which is unusual, according to him.

“She (Ebelechukwu) left where she was sitting and walked straight to where Ambassador Bianca was sitting calmly and started verbal attacks on her,” he added.

He recalled that when the altercation started, he rushed to restrain the two women to ensure that “no harm was inflicted on Ambassador Bianca Ojukwu, who was seated very calmly.

“It was a low moment for the event. That thing that happened was an anti-climax for all of us and we are very sad about it,” he added.