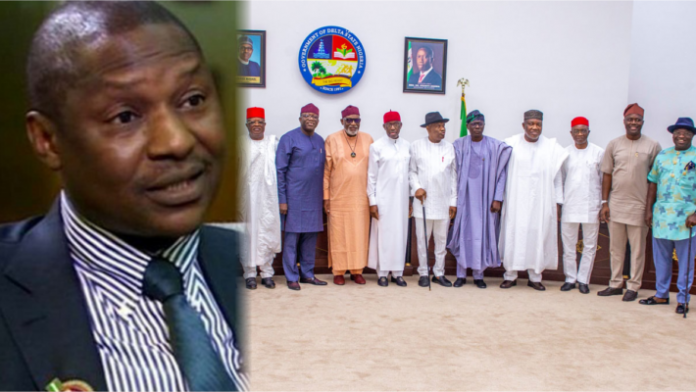 Attorney General and Minister of Justice Abubakar Malami aroused people, particularly from the South, to seething fury when he said on May 19 during a ChannelsTV interview that Southern governors’ May 18 resolution to ban open grazing in their part of the country would be synonymous with northern governors banning the sale of spare parts in their own gubernatorial spheres of authority.

This was a dreadfully mistaken analogy that instantiates the age-old English expression, “comparisons are odious.” First, the governor of Benue State, which is in the North, has also signed a law banning open grazing. It isn’t unlikely that other northern states will follow suit with some version of an open-grazing ban at some point. So, it’s not exactly as cut-and-dried, north-versus-south binary as Malami makes it seem.

Second, as I pointed out in my May 20 social media update, Malami’s imperfect contrast of contexts is an invidious and wholly gratuitous dog-whistle ethnic jibe at Igbo people even though it wasn’t just Igbo governors who endorsed the banning of open grazing; Yoruba, Ikwerre, Bini, Ijaw, Ibibio, and Obanlikwu governors endorsed it, too.

Although the expression “dog whistle” originated in Australian English, it was popularized and exported to the rest of the world from America, and it means the devious, loaded use of words and imagery in ways that seem harmless and innocent on the surface but that actually send a special, often bigoted and divisive, message to an intentionally preselected group of people.

It’s just like how “terrorist” has now become a dog-whistle reference to northern Muslims among southerners. For instance, in December 2014, Mrs. Rose Chinyere Uzoma, the then Comptroller General of the Nigeria Immigration Service, told members of the National Assembly that she subverted the laws and conducted a widely condemned, secretive, regionally skewed recruitment into the immigration service because she didn’t want to “unknowingly employ terrorists.”

Well, it turned out that northern states with Muslim majority populations were the least represented in Uzoma’s secretive employment exercise. I called her out in a December 29, 2012 column titled “Terrorism and Recruitment into the Nigeria Immigration Service.” Malami is as guilty of invidious dog-whistling as Uzoma was.

Another reason Malami’s comparison is odious is that it’s at once wildly inaccurate and factually impoverished. As many people have already pointed out, it is cows, not herders, that are banned from uncontrolled grazing because they destroy farmlands.

Spare parts don’t destroy anything. On the contrary, they supplement the middle-class indulgence of car ownership for Nigerians.

The southern governors’ resolution, as I understand it, is, in fact, not an attack on cows or on herders. It’s merely a restriction on an act: open grazing. Ranched cows are not affected by the resolution. And the constitution guarantees the rights of Nigerian herders, as individuals, to move to any part of Nigeria—like everybody else. (Of course, this excludes non-Nigerian herders in Nigeria whose proliferative presence even the government has acknowledged many times).

Chapter4, Section 41 of the Nigerian Constitution says, “Every citizen of Nigeria is entitled to move freely throughout Nigeria and to reside in any part thereof, and no citizen of Nigeria shall be expelled from Nigeria or refused entry thereby or exit therefrom.” The resolution of the southern governors hasn’t violated that.

But several governors have, in the past, violated this constitutional guarantee without as much as a whisper from Malami. In August 2019, the Lagos State government accused some northerners of “illegal mass movement” into the state and arrested them. I passionately condemned this in a September 7, 2019 column titled “Victims of Xenophobia Abroad, Culprits of Xenophobia at Home” and contributed to their unconditional release.

In April 2020, in contravention of both common sense and well-established conventions, the Kano State government also “deported” a man from Kano to Jigawa State after he tested positive for the coronavirus. As I pointed out in my May 2, 2020 column titled “COVID-19 Dramatizes Nigeria’s Countries-Within-a-Country Conundrum,” Kano later opened the floodgates for the recriminatory “deportations” of almajirai in Nigeria’s northwestern states by first “deporting” more than 1,000 children to their home states.

The Kaduna State government, I pointed out in the column, “sensationalized Nigeria’s countries-within-a-country absurdity on April 28 when it closed its ‘borders’ and arrested 100 people ‘hidden inside a truck coming from Kano, and several others smuggled from Lagos by a trailer conveying goods to Kano,’ according to ChannelsTV. No government, as far as I’m aware, has condemned this.

“Since states are not sovereign entities, they can’t have ‘borders.’ What they have, according to the Nigerian constitution, are ‘boundaries,’ which they, in fact, have no jurisdictional competence to police. Only the federal government can, under certain circumstances, impose limits on freedom of movement within the country.

Malami was unseen and unheard when all of these violations of the constitution occurred, but he is suddenly interested in these matters because cows and regional politics are involved. That, in my opinion, bespeaks reckless and extreme irresponsibility, not to mention toxic incompetence and bigotry.

In any case, the harm of open grazing disproportionately affects more northern farmers than it does southern farmers since farming is the North’s mainstay and open grazing hurts farming. I know of scores of relatives, friends, and acquaintances from all parts of the North who have stopped farming because of the increasingly lethal dangers of open grazing.

In a January 20, 2018 column titled “Existential Threats of Nomadic Pastoralism to Nigeria,” I wrote:

“To give just one example of how this anachronistic practice is ruining and displacing lives, in my local government, most peasant farmers have abandoned farming (and I know this is true of most traditionally agricultural communities) because of the menace of cattle herders. Farmers toil day and night to tend to their crops only for herders to destroy them in a day.

“Last year, one of my younger brothers expended time, money, and energy to cultivate huge yam, peanut, and corn farms. He returned from school (he is an undergraduate) one day to find that almost all of his crops had been eaten by herds of cattle. Now he says he will never farm again. And he is not alone.”

The consequences of the mass desertion of farming are only just now manifesting in the form of food shortages and high costs for food. This will only get worse if nothing is done.

Malami’s “spare parts” comparison is faulty for another reason: Many state governments— including Kano, Kaduna, the FCT, Lagos, etc.— have actually banned the use of motorcycles and minibuses for intra-city mobility in what I once called a “Transportational War on Nigeria’s Poor” in a February 2, 2013 column. That directly affects spare parts sellers.

The ban on commercial motorcycles not only inflicts misery on and halts internal mobility for millions of the urban working poor and the people who survive on it, it also deprives spare parts sellers of a huge chunk of their clientele. Why has Malami not come out in defense of commercial motorcyclists and spare parts in the same way he has come out in defense of cows?

Again, several states in the North habitually seize and destroy alcoholic beverages belonging to other Nigerians who have a constitutional right to sell them to willing customers. Malami has never protested this violation of their rights.

Malami clearly allowed his prejudice to overpower his mind. As a wise man once said, prejudice deceives when it talks, distorts what it sees, and destroys when it acts.