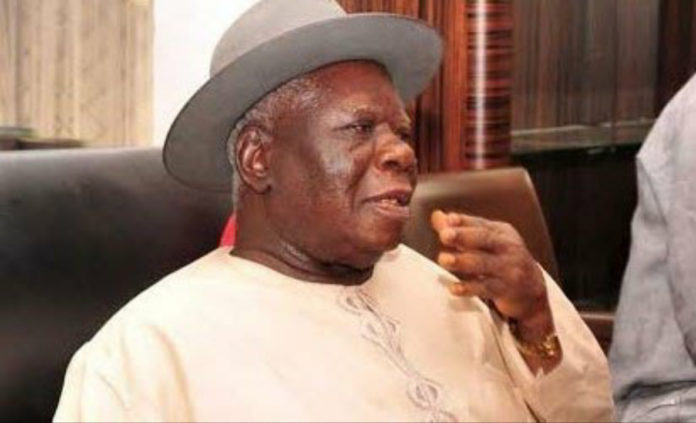 The Pan Niger Delta Forum (PANDEF) has called on Igbo leaders to denounce and apologize for the remark of the Indigenous People Of Biafra (IPOB) against its leader, Edwin Clark.

The seccessionist group had belittled Mr Clark over his recent assertion that they were dreaming to think that the present-day South-South geo-political zone will join its bid to restore the defunct Biafra Republic.

Emma Powerful, spokesman of IPOB, in a statement said the elder statesman is a known saboteur and betrayer, citing the role he played in the thwarted second term political ambition of former president Goodluck Jonathan as case study.

But in a statement by its national chairman, Emmanuel Essien, PANDEF demanded that Igbo leaders denounce and apologize for the remark of IPOB, saying refusal to do so would mean a tactical endorsement of the disparaging comments.

Mr Essien restated the remarks of the Ijaw national leader distancing the oil-rich region from the clamour for Biafra.

“Let us restate, without any equivocation, that the Niger Delta Region is not part of Biafra and that no inch of the South-South Geopolitical Zone shall be part of any imagined “Republic”, the group said.

“It’s rather puerile for IPOB or any other group to consider that Niger Delta Region would be part of any arbitrary contraption. If it becomes necessary for the Niger Delta people to pull out of this country, we shall do so, on our terms.

“Over the years, the highly respected Chief who was a Federal Minister of Information, and Distinguished Senator of the Federal Republic, has in his capacities as an educationist, politician, public servant, lawyer, lawmaker, community leader and nationalist, continued to play vital roles to stimulate unity, peace and development in the Niger Delta Region, and Nigeria, at large.

“Though PANDEF assumes no well-meaning Igbo son or daughter would sanction the aspersion by IPOB on our respected National Leader, however, we would insist that the Leadership of the Igbo Nation denounce the irresponsible statement by IPOB,” its statement partly read.