With only three days to constitutionally allowed deadline, the ruling All Progressives Congress (APC) has eventually notified the Independent National Electoral Commission (INEC) of its intention to hold its national convention.

In accordance with Section 85 (1) of the Electoral Act (2010) as amended, all political parties in the country are mandated to give the commission at least 21 days notice before holding a convention.

After much reluctance, given the backdrop of crises ravaging its state chapters, a letter surfaced on Thursday indicating that the ruling party has informed the electoral body of the coming convention.

In the letter dated February 2, 2022, the APC officially informed the INEC about its decision to conduct its February 26 National Convention.

“This is to inform the Commission that our great Party has scheduled to hold its National Convention on Saturday, 26th February, 2022.

“This serves as a formal notification pursuant to the provisions of Section 85 of the Electoral Act (2010) as amended.

“Kindly arrange for your officials to monitor the exercise accordingly,” the party said in the notice jointly signed by the interim National Chairman of the party and Secretary, Mala Buni and John Akpanuodehe. 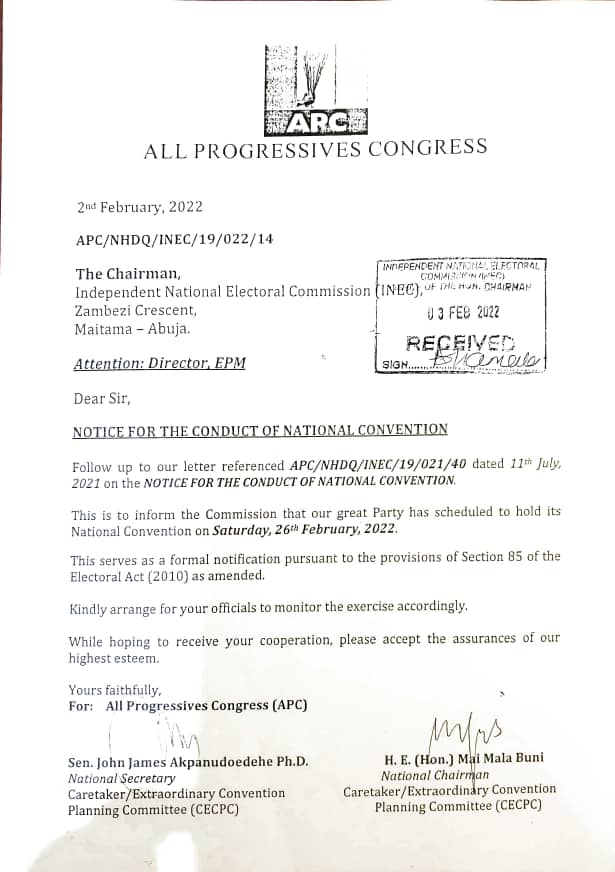 The party’s eventual move is in defiance of some of its party members and group, calling for an extension of the event, due to some unresolved underlying issues.

The Coalition of APC Women Groups, at a press conference on Wednesday, called on President Muhammadu Buhari to postpone the convention indefinitely.

They argued that holding the convention as slated will be like ”building a superstructure on unstable soil.”