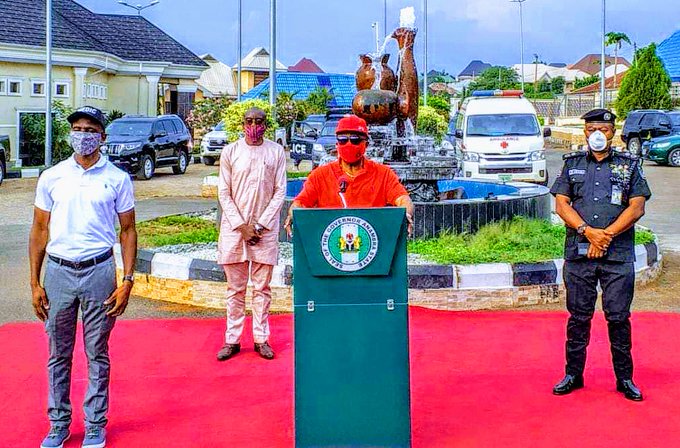 In reaction to a viral video clip circulating on social media, the Anambra State government has debunked the reemergence of the defunct dreaded Bakassi Boys in the state.

The one minute twenty six seconds clip seen by TODAY POLITICS showed dozens of armed men moving on foots with sounds of gun shots renting the air while two of their vehicles trailed behind as they matched around streets of Awka, the state capital.

The are said to have staged a come-back to crush cultists whose activities have recently been prevalent in the state capital while security agencies watched helplessly.

In a statement by Don Adinuba, Commissioner for Information & Public Enlightenment, the outgoing Willie Obiano administration says it has not intention of bringing back the brutal group which wiped out violent criminals in the Igbo predominantly area late nineties and early two thousands.

Below is the statement by Mr Adinuba on the development on Wednesday.

1. An unidentified amateur video photographer has made a video claiming that the controversial security outfit known as Bakassi Boys, which was two decades ago used in Abia and Anambra states when the two neighbouring states were almost overrun by violent criminals, is back, this time in Awka, the Anambra State capital. The video quickly went viral because of its sensational appeal. A section of even the mainstream media has publicized the video, thus giving it a veneer of credibility.

3. The section of the media that reported the purported return of the so-called Bakassi Boys, which is not backed by any law in the state, would have known better if only they had contacted any official of the Anambra State Government, especially the Commissioner for Information and Public Enlightenment, who is well reputed for having easily the greatest open-door policy of all his peers in the country and always endavours to promptly address the query or inquiry of every journalist. In fact, the journalists would have availed themselves of the right information if they had bothered to speak to any official of the Anambra Vigilante Group (AVG) or any official of the Awka Youth Movement.

4. What the journalists and some members of the public innocently confused with Bakassi Boys’ return to the state is a noble effort of some Awka indigenes to fish out cultists in the community who have attempted to capitalize on the inadequate number of policemen on patrol in the town in the last few months to fight themselves with dangerous weapons. The fights among cultists resulted in some casualties. Awka youth, appalled by the sad development in their peaceful hometown, decided to fish out the cultists from their residences and hideouts. An unidentified young amateur video photographer recorded one of the operations and can be heard in the video exuberantly screaming “Bakassi! Bakassi Boys are back in Awka!”

5. The hysterical announcement is far from the truth. Any person who watches the video to the end will certainly see two vans which belong to the Anambra Vigilante Group right in the scene. No fair-minded person can mistake the AVG for the unorthodox security outfit which was outlawed several years ago. Whereas Bakassi Boys used to arrest suspects, tried them within minutes and executed them in broad daylight in a most savage manner, the AVG is a modern security outfit created by law. It neither tries nor sentences suspects. A stickler for due process, the AVG cannot tolerate lawlessness. It works in close collaboration with the traditional ruler and president general of each of the 179 communities in the state but also the Nigeria Police Force. In fact, the AVG chairman is Mr Ikechukwu Aduba, a fantastic gentleman, author and historian who used to be an excellent police commissioner.

6. The people of Anambra State are advised to go about their normal business. Anambra State is peaceful and calm. There is no Bakassi Boys security outfit in Awka or any other part of our beloved state. The existing security agencies are doing their best to protect all of us.

God bless Anambra State, the Light of the Nation.