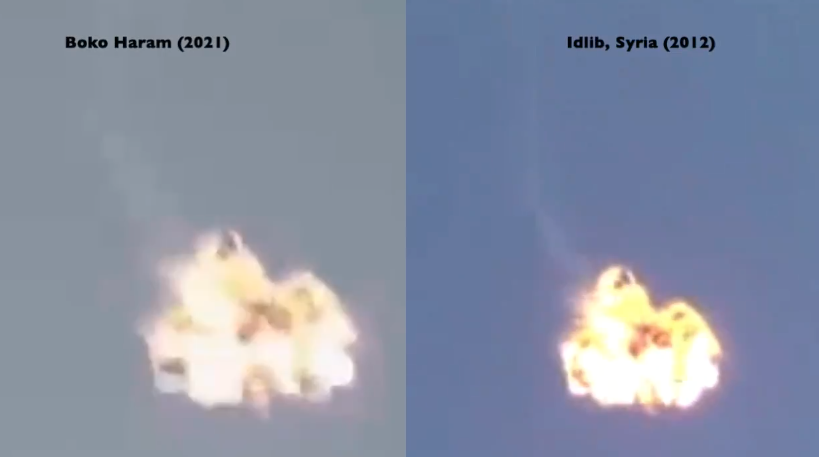 It appears Boko Haram terrorist group doctored a video clip it sent out yesterday while claiming to have shot down an aircraft belonging to the Nigerian Air Force (NAF).

The Abubakar Shekau faction of the extremists released the clip which showed the aircraft exploded mid-air before heading towards the ground.

It claimed its fighters gunned down the aircraft aiding ground troops during counter-insurgency operation in Borno State on Wednesday when the aircraft lost radar contact.

But a Sweden-based analyst, Hugo Kaaman, who reviewed the clip said it was doctored with a similar clip from Syria in 2012 although the aircraft actually crashed as opined by the Airforce authorities.

“Boko Haram just released a video claiming it shows a NAF jet shot down by the group. Looking at the video, it appears as if the jet explodes mid-air. However, this is not true. BH took a 2012 video showing a SyAAF helicopter exploding mid-air over Idlib and superimposed it. Weak,” Kaaman said in series of tweets Saturday morning attaching the below video.

“Just to be clear, the jet really crashed. It’s unclear whether this was due to hostile fire or technical issues. The wreckage can be seen in the same Boko Haram video. This video merely highlights Boko Haram’s fake footage of the shootdown itself,” he added.

His claim was reteirated by Calibre Obscura, an arms researcher who said the cause of the crash was not immediately clear.

Meanwhile, NAF in its reaction to the video clip by the terrorists said the proscribed group does not have the capability to bring down the jet.

“Although the video is still being thoroughly analysed, it is evident that most parts of the video were deliberately doctored to give the false impression that the aircraft was shot down,” NAF said.