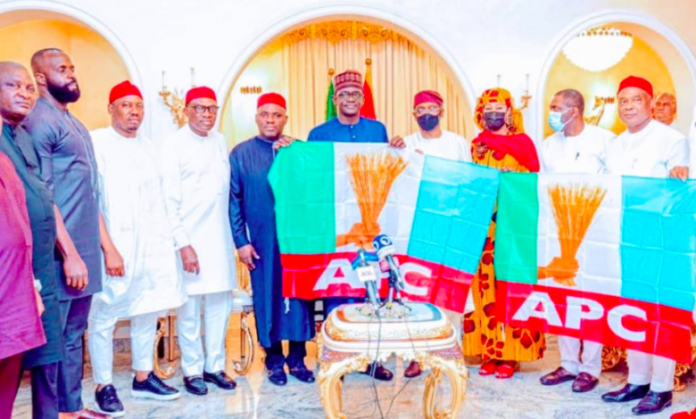 About 11 serving and former lawmakers in Anambra State have joined the All Progressive Congress (APC).

The defections is coming four weeks after six lawmakers of the ruling All Progressive Grand Alliance (APGA) defected to the opposition party.

The new development was announced in a statement on Thursday by Mamman Mohammed, Director General Press and Media Affairs to Yobe Governor, Mai Buni, who heads the caretaker committee of the APC.

The new entrants comprising of five serving and four former House of Representatives members and two members of the Anambra State House of Assembly defected from Peoples Democratic Party (PDP) and (APGA).

Mr Buni, the Chairman, APC Caretaker Extraordinary Convention Planning Committee, alongside the Speaker of the House of Representatives, Femi Gbajabiamila; Deputy Senate President Ovie Omo-Agege; the Governors of Imo, Kogi, Kano, Jigawa and Kebbi States received the defectors at the national headquarters of the party in Abuja.