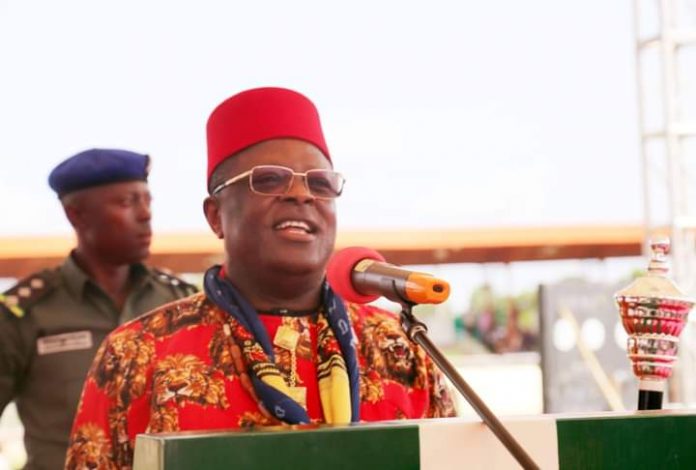 Governor Dave Umahi of Ebonyi State on Thursday reacted to rumors that he has dumped his presidential ambition for the senatorial ticket of the All Progressive Congress (APC).

Mr Umahi who reacted through the state Commissioner of Information and State Orientation, Uchenna Orji, described as a fake, a report in an online medium suggesting he has stepped aside and is now pursuing the senatorial ticket of Ebonyi South.

The governor said the rumor, he responded to barely an hour after it was published on Tuesday, was the handiwork of the opposition politicians in the state.

“Our attention has been drawn to a senseless falsehood being irresponsibly shared on social media platforms by opposition forces and mischievous minds who are idly making mendacious propaganda against the Presidential ambition of the Governor of Ebonyi State Chief David Umahi,” reads a statement from Mr Orji.

“Contrary to their cowardly fabrications against the well thought and nationally accepted Presidential ambition of Governor Umahi, we restate for the pleasure of progressive Nigerians home and in diaspora, that the falsehood trending currently on Social Media that Governor Umahi has dropped his ambition for Senate.

“This is nothing but empty and vaunting architecture of political charlatans who are intimidated by the tall and admirable hallmarks of leadership excellence recorded by Governor Umahi and which has put him forward as a frontline Presidential material that can win the hearts of Nigerians in 2023 General Election.

“Governor Umahi’s Presidential ambition is unwavering and is alive in the hearts of Nigerians. We advise the opposition forces and their agents to desist from all these fruitless and bizarre orchestrations against God’s servant and accomplished leader, for that is bringing more ostracism to their own organisms. We assure them that no matter the secrecy and potency of their plots, God will bring it to nought as we come in the name of God,” the commissioner added.