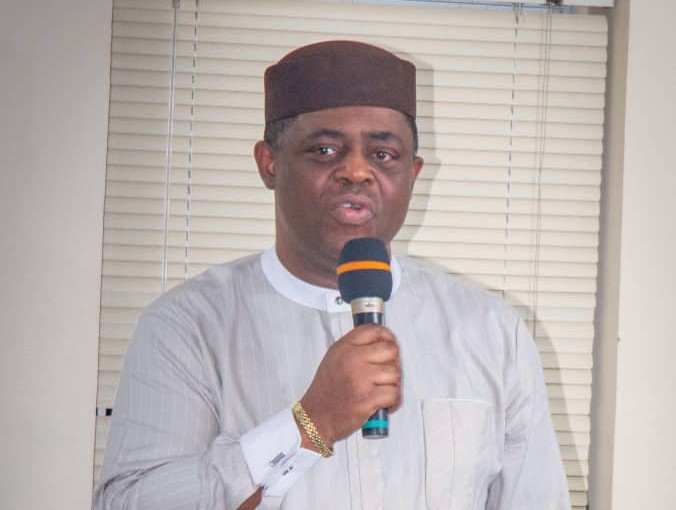 In a statement titled ‘Our Party, APC Must Tread The Path of Equity’, Governor Rotimi Akeredolu, the Governor of Ondo state, said, inter alia, the following:

“It is the turn of the Southern part of the country to produce the next President. The party leadership should have no difficulty in making a pronouncement on this very important issue just as it has fixed various fees for the purchase of forms. This must be done without delay. The principle of Federal Character is enshrined in the 1999 constitution as amended. It would be disingenuous for anyone to argue against rotation at this period. We must not keep our party men and women guessing on the position of the leadership of the party. This is the time to weigh in and take control of the process. No statement must suggest, even remotely, that the party harbours certain sentiments which may predispose it to consider throwing the contest open. This is certainly not the time for equivocation. EQUITY DICTATES THAT WE TAKE A STAND!”

As bellicose and strongly-worded as ever, my dearest brother has spoken his mind courageously. Kudos to him but I beg to differ.

Threatening your party leadership simply because you are a Governor is not the best way to establish common ground and a reasonable consensus on any matter.

More on this later.

In his own contribution Senator Ali Ndume said the following.

“They (meaning the Senators supporting Senate President Ahmad Lawan for President) have not come because they know my position. I have nothing against Ahmad Lawan. He is my colleague. But I have everything against injustice. I won’t support even my biological brother. Fielding a northerner is tantamount to injustice and tantamount to a third term. The so-called Northern Elders that are pushing it are doing so to perpetuate injustice. It is the turn of the South and we have to support them to actualise this. I am disappointed in those that are pushing this (meaning Northern Presidency). I have since taken a position even before my alignment with Rotimi Amaechi”.

These are interesting words from a dear friend and a man for whom I have immense respect. However, once again I beg to differ.

Some who have insisted on a Southern Presidency next year are less charitable and far more rabid, vicious and aggressive than Akeredolu and Ndume.

They have howled, growled and threatened to tear the country apart and indulge in all manner of subterfuge and violence if they do not get their way.

This contribution serves primarily as a response to them and also as a gentle warning and caveat to the more restrained and civilised voices who secretly harbour their thoughts and share their warped disposition but are smart enough not to express it publicly.

To them I say the following.

Kindly stop the howling, the growling, the barking, the wailing, the sulking, the lamenting, the rolling all over the floor and all the other infantile expressions of hopelessness and frustration and get real.

More importantly be cool-headed, cerebal, analytical, intellectual, civilised and thorough in your analysis, stop the nonsense, control your emotions and take sentiments out of this.

The quest for power is a serious business. It is not served on a plate and it does not come easily.

Whilst most in the South are blabbing, threatening and insulting all those that do not see things their way, the majority of the North are planning silently and effectively keeping their cards close to their chest and operating in unity, peace and one accord.

This is both beautiful and powerful and it cannot be downplayed or ignored. It is a virtue and not a weakness.

And those that malign them or treat them with contempt for charting this course do so at their own peril.

If the South really wants the Presidency next year in the name of fairness and equity then I challenge them to let every single aspirant from both the South West and South South in BOTH parties STEP DOWN for a candidate from the South East and support that candidate.

Unless and until they have the presence of mind and fortitude to do so they cannot fairly say the Presidency must not go to the North.

The people of the North East and North Central have been denied their fair share of democratically-elected leaders.

Why should they be denied this opportunity again just to pave way for a Southerner in 2023? Are they not Nigerians as well? Are they second class citizens?

Do they not also have the right to feel marginalised and deprived and are they not entitled to have their own dreams and aspirations?

The North Central has NEVER enjoyed a democratically-elected President in our entire history and the North East has not enjoyed it for 62 years!

Is that reasonable, just or fair?

Worse still in the case if the North East the entire zone has been ravaged by terrorism and barborous banditry inflicted by mainly foreign sponsored elements over the last 12 years and now some are saying none of their sons can run for the Presidency? This is surely callous and unconciable.

Can anyone rightly say they will go to war or sabotage the chances of their own political party just because aspirants from either the North Eastern or North Central zones may emerge as the party flag bearer or because their party refuses to zone the Presidency to the South?

Is this not, at best, irresponsible and, at worse, madness?

Is it a crime to come from Yobe, Borno, Kogi, Kwara, Nassarawa, Niger, Adamawa, the FCT or any of the other North Eastern or North Central states? Surely this cannot be so.

It is absurd and disingenuous for anyone to argue that the SW, who have enjoyed power for 8 years as President and 8 years as VP over the last 23 years alone should take the Presidency next year.

What about the South East, North Central and North East?

Are they not Nigerians too?

We should not talk about North and South anymore. These are archaic, anachronistic and outdated designations. There is no longer any ONE NORTH and there was never any ONE SOUTH.

What we have today are six distinct, strong and intellectually and spiritually independent zones and that is what we should talk about.

My view is that we should allow any of the three zones that have not had their fair share of democratically elected Presidents have an opportunity to do so next year.

That is what you call justice and fairness and all the lamentations, insults, threats and barking in the world cannot change that.

The South East, North East and North Central are peopled by decent, hard-working, diligent, brilliant, civilised leaders as well and they were born free. They were not born Nigerians to be slaves to the people of the North West, South West and South South.

And those of us from the North West, South West and South South were not born to be their masters and overlords and neither were they born to be ours.

We were all born to be equals before God and the law and anything short of that will lead to catastrophy and put us on the road to Kigali.

Finally let me say this: if the PDP picks a northerner as its candidate then the APC MUST do the same in order to win.

Anything outside of this will be folly and a recipe for disaster.

Politics is a game of numbers and it is a winner takes all match. There are no prizes for the runner up.

The APC must not destroy its chances of winning or sacrifice its chances of victory on the alter of a Southern Presidency despite the rantings of some regional irredentists who have a divisive agenda and who ought to know better.

We must do all we can to win and judging from what I am seeing and the fact that an Atiku presidential bid is likely to be presented by the PDP the only way we can do so is if we field a strong candidate from the North Central or North Eastern zone.

Threats that the country will divide or that there will be secession if this happens are unfounded, baseless, alarmist and false.

We shall hold the line and weather the storm. We shall do whatever it takes to keep the peace and keep our flag flying.

Nigeria shall remain united and together we shall go from strength to strength.