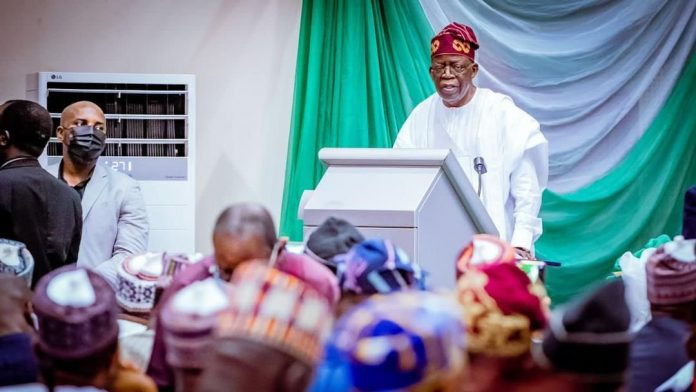 Bola Tinubu, former Lagos governor and frontline presidential aspirant met with the All Progressive Congress (APC) caucus members in the House of Representatives.

The meeting with took place on Wednesday at the National Assembly shortly after Mr Tinubu met with APC Senators and secured their endorsement of his candidacy.

During the interactive session, the House Leader, Alhassan Ado Doguwa, spoke on behalf of his colleagues at the green chamber who through a voice vote pledged their support for the APC chieftain.

“You are at home because you are here with your sons and daughters who are proudly your own, who have benefited individually and collectively in your socio-political investment in the politics of this nation,” Mr Doguwa told Tinubu.

“You have also supported Nigerian democracy in many ramifications. We welcome you because you have paid your dues. I want to repeat without fear of being misquoted, this very vibrant and very gentle pillar of APC has paid his dues.”

Turning to his colleagues, the house leader said it was time to pay back the support which they got from the presidential hopeful.

“I won’t look at your faces individually and collectively to tell you that time has come for us to pay back,” he said.

Members of the caucus massively chorused ayes when the House Leader put the question of supporting Tinubu to a voice vote.

Speaking earlier, the former governor described himself as the most qualified to succeed President Muhammadu Buhari.

“What I want to request you to do is to support me. I have discussed that aspect — my lifelong ambition with Mr President, that after the end of his term I want to step in his shoes and not step on his toes,” Mr Tinubu reiterated.

“He responded to me saying well, ‘come out let us see you run and we see how best we can promote your democratic credentials’.

“Most people have nothing to offer but questions and create doubt. I am not here to be defensive. I am here to tell you that I am one of the best products that you can sell.

“I have been in the corporate world with a background in the public sector, academic, finance and development.”