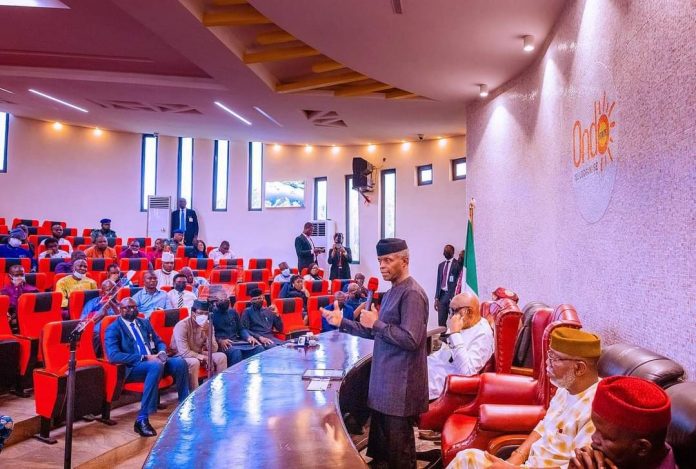 Vice President Yemi Osinbajo says he will be betraying the country should he refuse to run for president and succeed his principal President Muhammadu Buhari, next year.

The News Agency of Nigeria (NAN) reports that Mr Osinbajo, who declared interest in the race earlier in the month, stated this on Monday when he visited Governor Rotimi Akeredolu of Ondo and stakeholders of the All Progressives Congress (APC) in the state.

The number two citizen, who has acted as president in acting capacity while Mr Buhari was away attending to his health, claimed he has gathered what it takes to lead the country besieged by worsening insecurity, rising inflation and thriving corruption.

“Opportunity comes once in a while. It is also a privilege to serve. Our country needs service that will bring the country out of the woods,” NAN quoted him as saying. “Nobody can be anything without the endorsement of God. I declared my intention based on the fact that I have served for over seven months as acting president. I was given very serious responsibilities as an acting president.

“President Muhammadu Buhari, just out of his open-mindedness and his own generosity, ensured that I was given very serious responsibilities as vice-president and I also acted as president.

“Many times, the president, when he was away, said pointedly to me that ‘look, I don’t want to feter your discretion in any way; as acting president, you are president; just make sure you are fair and just; don’t refer anything to me; don’t ask me any questions; just do whatever you need to do’.

“Now, the opportunity has come. With the experience that I have, the connection and contacts that I have both locally and internationally, it will be a betrayal to the country not to accept to serve the country.

“Many people are dying for the country every day. If with all that has been given to me by the grace of God — all the experience — I now retire to Lagos or Ikenne to go and write my memoir, it would be a great injustice to this country.

“It will be great injustice to our country, that is why I have thrown my hat in the ring to ensure I make the best case for the position of president of Federal Republic of Nigeria,” he added.