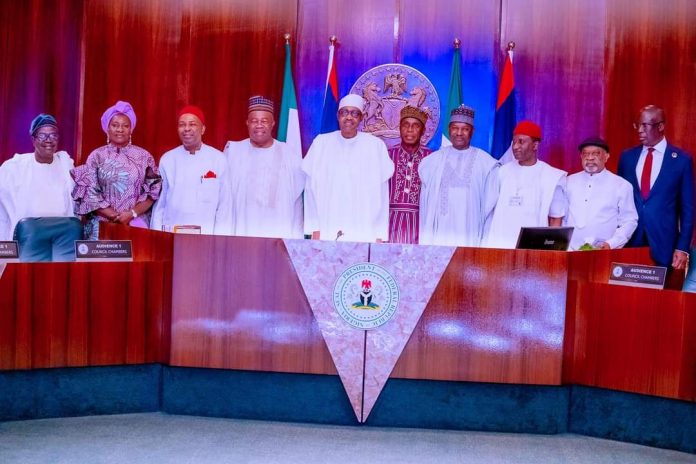 President Muhammadu Buhari on Friday met with minister who have resigned their appointments to pursue their various political ambitions.

According to a statement issued by Femi Adesina, presidential spokesman, the president said a significant number of them have been sufficiently equipped to aspire to higher elective offices, including the office of the president.

”I have no doubt that if the next President emerges from among former members of this cabinet, like any other aspirant, ample competence and outstanding service delivery would be on display. This will be part of our legacies to Nigerians,” Buhari said.

The president, who commended the departing public officers for serving the nation sacrificially, ”with dignity and honour”, had at the last federal executive council meeting on Wednesday directed that all ministers and other political appointees who aspire to contest for elective offices in the 2023 general election should resign their current appointments.

”I note that some have complied while others are in the process of doing so,” the president said.

”I would like to use this opportunity to commend your decision and courage to contest for elective offices and your compliance with my directive.

”I also wish to thank you for your invaluable services to this nation through your contributions as Cabinet members.

”I wish you success in the upcoming elections and in your future endeavours,” he said.

Buhari told the ministers that looking back as the head of the team over the years, he had fond memories of incisive and robust discussions during cabinet meetings, rendering of performance reports during special sessions and presidential retreats.

”In 2015, citizens of this country overwhelmingly voted for me to become the President of this nation on the platform of the All Progressives Congress (APC),” he said.

”Selecting members of the Cabinet went through a careful process so that the best and most competent could emerge. The performance of that class of 2015 proved me right.

”In 2019, Nigerians similarly re-elected me as President. Again the selection went through another meticulous process.

”That re-election was significant because it served as a referendum on our performance during the first term and it inspired me to bring back some of the members of the first cabinet either to their old Ministries or re-assigned to other sectors.

”New Members were also brought on board to inject fresh energies, skills and ideas to enhance the execution of government’s programs and policies.

”With these and much more, I am happy to note that a significant number of cabinet members have become sufficiently equipped to aspire to higher elective offices, including the Office of the President. This shows the impact of the experience gathered while serving as members of the Federal Executive Council.”