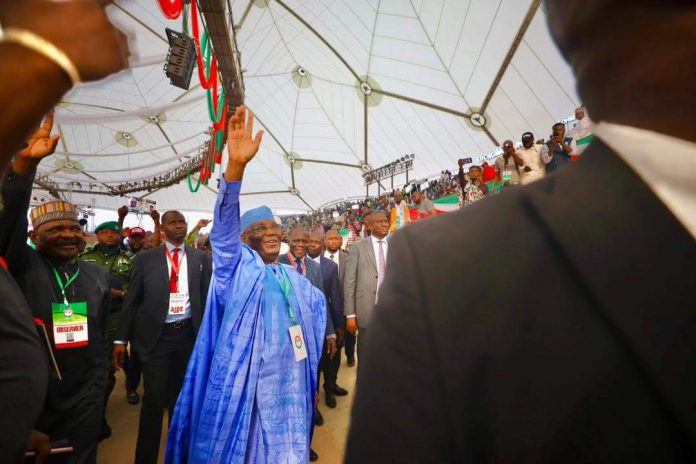 Mr Abubakar, a serial presidential candidate, emerged winner of the party’s special convention in Abuja after defeating 12 other aspirants.

The 2019 candidate of the opposition party in 2091 polled 371 votes of the 767 accredited ballots to come first while Governor Nyesom Wike trailed behind with 237 votes.

While ex-Senate president, Bukola Saraki, came third with 70 votes, Governor Udom Emmanuel scored 38 votes to come fourth at the exercise that began on Saturday at the Moshood Abiola National Stadium.

The only female in the race, Oliver Diana, and another contestant, Sam Ohuabunwa, scored one vote each.

The other contestants – including formee Goveenor Ayodele Fayose and Magaine Publisher, Dele Momodu – got zero votes.

Governor Aminu Tambuwal of Sokoto State had stepped down for the former vice president before the commencement of voting.

Mr Abubakar will face whoever emerges the candidate of the ruling All Progressive Congress (APC) during next year’s election.